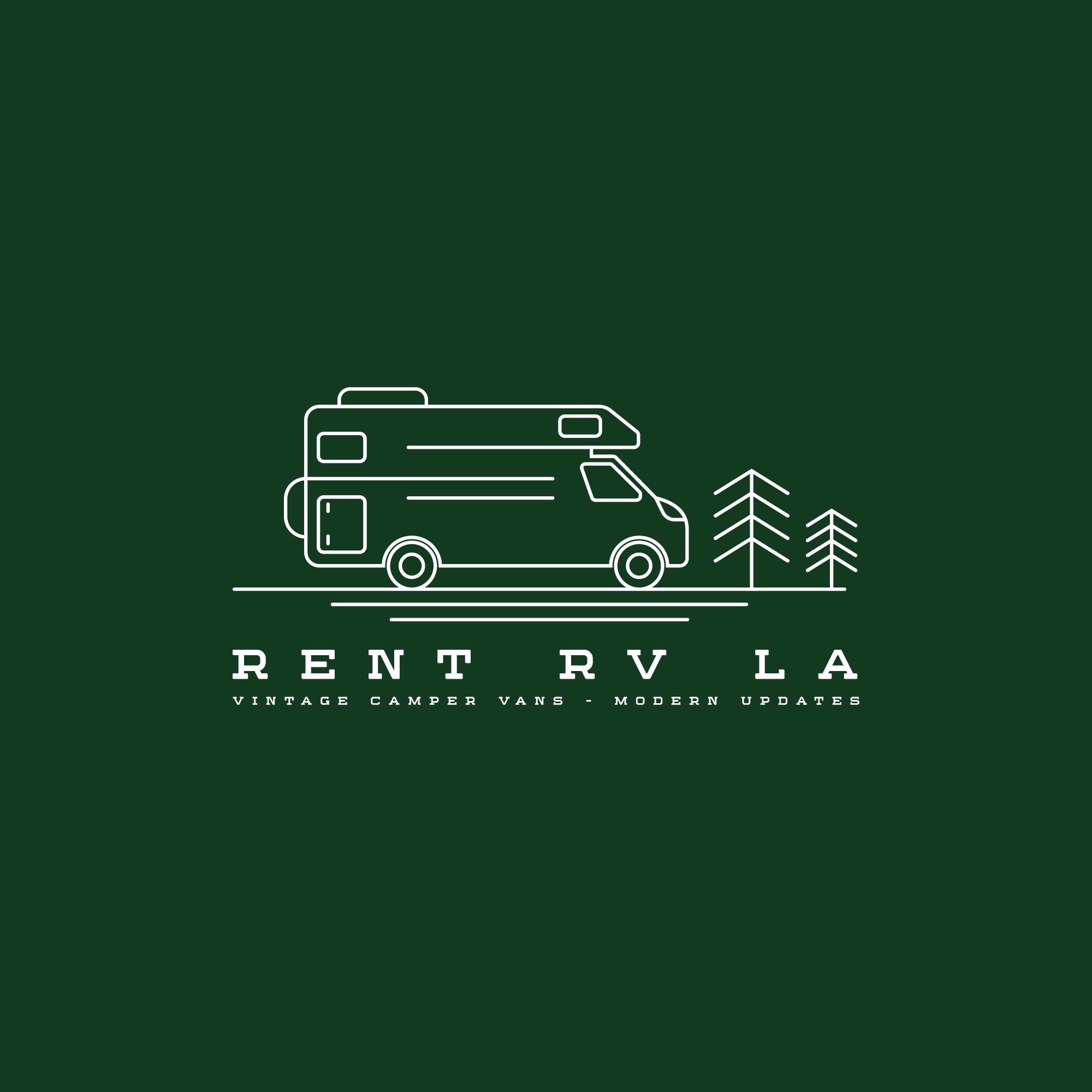 4.89
100% response rateTypically responds within an hour

Hi- I am Josh, Owner of Rent RV LA. We provide updated vintage Camper Vans and Class B RV's from the 80's and 90's that are fully loaded and ready for your adventure. All of our RV's come with 200 miles free nightly. We have been providing RV Rentals since 2017 and get amazing reviews. Our RV's are like family. All of our RV's have Wifi Hotspots with Unlimited Data, HD Rear View Cameras, Solar, Portable Power Stations, Inverters, and are fully loaded with Bed Linens, Warm Blankets and Pillows, Stocked Kitchens, Bluetooth Stereos, Emergency Supplies, Waffle Makers, Disco Balls, French Presses, Playing Cards, and tons of other extras. They are all very well-maintained and love traveling all across the US. All of our units are rented almost every weekend , but please ask about current promo codes, help with sold out campgrounds and anything else we can do to help make your trip more enjoyable. We look forward to camping with you soon!

4.89
100% response rateTypically responds within an hour

Memories made on trips with Rent RV LA's RVs

Two days before I was to pick up the vehicle, the owner warned me that the AC may not be working properly. He said he would show me in person, how to deal with it if there was a problem. That was a bit of a red flag, but I was still very optimistic. On the day of the pick up the owner went through the many precautionary things I should do so that the car won’t die on me. It was a lot of take it, But I listened and I was still okay with all of it. He also said I couldn’t take the car on dirt roads “it was an outdoorsy policy” which I later found out it was just his. The next day i was set to take the van on a drive with my girlfriend but it didn’t turn on. The battery was completely dead. I contacted the owner to inform him of what happened and he tried his best to help over the phone but nothing worked. Later that night, he came down and we got it to turn back on. I ended up driving the van back to his place that same night. The next day I contacted outdoorsy to let them know what happened and that I should probably get a refund, at least for 1 day. The owner immediately contacted me, in a very condescending manner to blame me for everything. He even said he thought it “was a joke” that I contacted outdoorsy. He also said “I didn’t think you would do something as stupid as leave a light on” basically assuming that’s what happened. This guy was very disrespectful to me. He refused to accept that his vehicle had issues even though he admitted to having changed the alternator just a week before my pick up!

Days later he informed me that the alternator was in fact faulty. At least he was honest about that!

The van was pretty cool for the 8 hours I got to drive it but I wouldn’t risk it. And I would NEVER want to deal with an owner like this.

Joshua was very informative and available. The camper van is well stocked and maintained. Yurtle is easy to drive, comfortable and not fussy. This van may not be a good match for clean freak type. We loved our adventure and would rent again. Thank you!

Thanks so much, Stacie! I look forward to next time. I had a few days between bookings so I replaced the cracked bathroom mirror, fixed the scratches on the wood inside and corrected the peeled paint on the outside. Yertle looks great and is ready for your next adventure!

I'm from Germany, so I'm really picky. But I also didn't want to travel in a Mercedes Sprinter that your German local delivery driver uses. I wanted an authentic American RV van. And Joshua's Dodge did the job! And Joshua was fun to interact with. And he gives you good value for money and isn't in the game to squeeze the last cent out of you. Everything was very fair.

Tip: These RVs are all quite complex reg. water/power/..., so listen carefully to the very comprehensive instructions Joshua gives you ;-)

Josh was a good host. He checked in with me to make sure I was doing okay and to see if I need anything. He worked with me on my arrival and was generous. Trudy drove well and had very few quirks for being as old as she is. My overall experience was a good one. The value was good although I believe outdoorsy should allow individuals to utilize their own insurance if it meets the criteria. Here’s a pic of Trudy and I with one of Josh’s bikes. Renting a bike is recommended. It truly helped make the trip an unforgettable experience. Errol was a class act through and through! Got us to the beach, carried 4 surfboard and 4 girls, and an incredible turning radius to boot! Thanks Errol!

We grew fond of Yertle over the course of the trip. (Yes, this RV is named Yertle!). Do not fear, Yertle is not slow like a turtle, in fact his rebuilt engine got us up to 75 MPH on a few occasions of needing to pass other vehicles -- although I'd recommend staying at or below 65 in general. Mechanically, although this is an older RV, we had no trouble at all. Second gear, if you know how to use it right (i.e., don't go over 45 MPH) will save your brakes on windy roads with a downhill grade.

If you're an experienced RVer, Yertle should be a piece of cake. In fact, Yertle is good for beginners because of his smaller size, so anyone who drives a car or van should be able to adapt pretty rapidly. There was a bit of a learning curve for us in terms of what powered what and what we could leave on, turn off, etc., since we'd never traveled by RV before. However, Joshua was extremely helpful and responsive anytime we ran into questions along the way.

Yertle slept three comfortably -- room for two in the back, and one up top above the driver's seat. That space is best for a kid or a dexterous, not-too-big adult since getting up there is a little bit of work.

The on-board WiFi was a nice touch, although sometimes it would come and go probably based on reception in the area.

Be aware that the dashboard A/C is great for the driver and front seat passenger but doesn't help the folks sitting in the back, so on a hot day on the road, they'll be very warm back there. The rooftop A/C is highly effective when you're plugged in at a site, but you can't use it when you're on the move.

We were happy that we opted to ask that Joshua include a cooler to supplement the built-in fridge, which only keeps things "cool" in warm weather. The cooler fit perfectly between the front seats and with an occasional change of ice, kept perishables well. The supplied cooking utensils were useful to have around, and the propane stove inside worked well and allowed us to prep some tasty meals.

The included 10' hose for black and gray water disposal is sufficient when you're at a well-designed dump site, but we found that at some campgrounds, the configuration was poor and we'd have needed a 20' hose to reach -- so in some places, we were unable to empty the tanks.

Overall, Yertle was a positive experience for us, in large part because Joshua was so supportive and responsive. On future trips, we might opt for a newer RV with better creature comforts, such as A/C throughout -- but if Yertle sounds like a good fit for you, I say go for it!

Perfect for our road trip! Josh is the best host, he goes above and beyond and is always available. Gas consumption was a bit steep but overall, amazing. Has great power, lots of storage space and is comfortable to sleep in. We absolutely would renr again

Very nice 1,300 mile trip in Sahara and communication with Josh was excellent, very responsive to all communications. Sahara was just what my two kids and I needed and the minor issue we did have (these things can be expected with an older vehicle) was handled promptly and efficiently and made for a great experience! Would recommend for future use!

The pickup from Josha was easy and informative, he walked me through the many functions and capabilities of Yertle, the RV. Driving up the coast was a beautiful experience, the van is very easy to drive and has great pickup and go. Everything I needed was at my fingertips, Yertle is well equipped to allow for ultimate comfort at the campsite or in a clutch, at a Costco parking lot. I would recommend this RV to anyone looking to get out and see the California coast and surrounding areas. Very easy to park this size RV--when larger vehicles were not allowed at city parks or other parking venues, Yertle (only 19ft long) was permitted. Having running water, a sink and flushing toliet in such a compact space made my trip so enjoyable. While Yertle is an older RV, it's in great condition, runs well and full of all the amenities you will find usually in larger vehicles.

Driving with Trudy was a life changing two months for me traveling throughout the country. We went through mountains, desert, national forests and parks, cities and towns to New York and back to California. A true adventure. Being a 30 year old RV, I learned so much about how to drive and maintain her, and she worked great! Josh was always there to answer my questions and help me along the way anytime this city slicker and never camper didn’t know how to work something. Be sure to always check oil and gauges, gain appreciation and patience going up inclines, and always try to find spots on level ground (Trudy is happier that way). I grew so much as a person in the process of all my adventures, and I couldn’t have done it without the quirky fun vehicle that Trudy is. Thank you, Josh!!! ❤️🙏🏼

Diana is an amazing car and we had a really good experience. Josh was very helpful al all times!

4 Photos submitted by Javier B.

Yertle is a great RV to drive. The mirrors and reverse-view camera made driving in L.A. traffic and parking around town very smooth. The engine has LOTS of power, even up some very steep roads. At the campsite, it was comfortable to sleep in and the solar generator/Nespresso machine were very useful because our site had no hookups. Our kids made great use of the on-board WiFi, too!

Couldn’t have possibly had a better experience renting this Van! Joshua was a wonderful host, he gave us a ton of great suggestions based on our trip route, which was much appreciated. “Errol” the van was fantastic, basically new condition inside, ran smooth as can be, always felt safe and secure while driving, even up fairly steep inclines. Clearly this is a van that has been incredibly well maintained and cared for. Also super vibey and old school, while still having all modern amenities you’d like in your vehicle. Will be highly recommending Joshua and Errol to anybody in need of a camper for a road trip, and would happily rent again!

It was an excellent experience! Sahara(the rv) was a really good rv across 1250 mills! All across from San Diego to San Francisco! The inside is comfortable, perfect for a couple, and one kid if you want so. Joshua was full time available for any kind of question, and giving us really good tips. I highly recommend this RV and the owner!