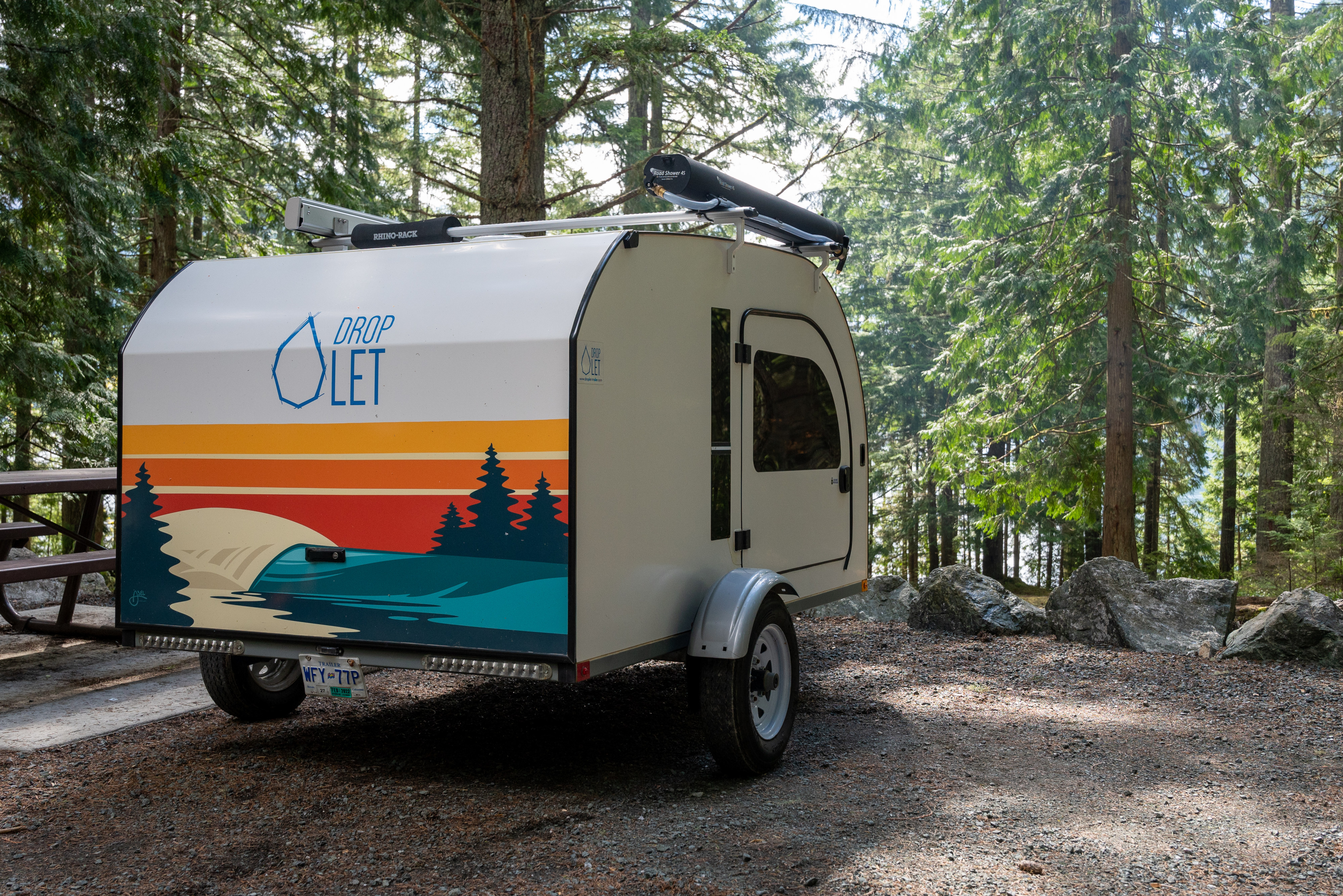 We have a Droplet teardrop camping trailer. Our main operation is based in Burnaby, BC. We have rental locations in London, ON, Seattle, WA, Las Vegas, NV and Doylestown, PA, with multiple coming soon. Rental in Burnaby is free should you place an order for a Droplet of your own. We put rental fees of up to $700 in other rental locations. Please, check out for details. We are looking forward to having you try out our tiny campers.

Memories made on trips with DROPLET teardrop Trailer's RVs

I booked the right droplet, but was given the wrong rental. I was even sent photos of the droplet I originally booked. Disappointing. My trust in Droplet has dropped severely.

Great trip! Just needed a coffee maker and some fuel for the Primus stove to make it perfect for me! Was advised to stop for fuel but ended up with the wrong type of canister so totally my mistake!

A 5000km, five week roadtrip through Northern and Eastern BC and this little Droplet was a joy. Small enough to maneuver and doesn't destroy the gas mileage. We'll thought out and intelligent design. Can't wait to pull this thing all the way across the country next spring.
David and Patty

We really enjoyed the Droplet rental and experience of clamping with it. It was a wet weekend and having the comfort of the Droplet made us glad we were not camping with our tent.

Everything about the Droplet worked very well for us. It is a well-thought out small camper that is perfectly suited to campgrounds. There were no surprises. One of its outstanding features is that it could be pulled with ease by our Prius Hybrid. It was easy to manoeuvre and set up and equally easy and quick to hook up. The bed was more than comfortable, lighting was excellent, electrical outlets and USB ports were right there. We used the kitchen to cook full meals and found it convenient and well laid out. Everything we needed was there: A fridge, sink and water, and a propane stove. We recommend the canopy. It went up quickly, was self-supporting, and even necessary in the rain or as protection from the sun. Summary: The Droplet was fun and attracted much attention wherever we went, particularly in ferry lineups. We have some great photos of our stay at Seal Bay campground if you need them. The pleasure was ours. Deb & Herb

Amazing as usual. We've booked several years in a row now and can't say enough about how much we enjoy the droplet.

Great trailer made locally by the attentive and friendly founder. Loved it!

It's always a pleasure to rent from Pascal. We've been renting his Droplet trailer for the past few years. The trailer is always clean, well maintained, and fully stocked with utensils, cookware, floor mats, lawn chairs for two. We look forward to another camping trip!

the little camper was well built and worked as advertised. My gripe is with the way I was charged to pay for the rental. $28 for roadside assistance. $21.10 for insurance $1500 security deposit and losing $7.34 on the currency exchange Canadian to US dollars. In essence I was charged for insurance that had an $1500 deductible. The total of unnecessary charges was $56.40 My Good Sam RV roadside assistance would cover any thing that may have happened in the short trip form Burnaby to Alice Lake a drive of about 1 hour and 20 minutes. We returned the droplet the next day Oct 1 and wait until Oct. 10 to get the refund of our $1500. Problem is my closing date on the credit card is Oct. 4. So now I have to pay the bank $1500 I do not owe them because of the delay to refund my deposit. Yes I will have a credit on my account but I am not one who enjoys paying a bank money I do not owe them. The droplet is nice unit for young healthy people but a bit of a problem for people my age. The way it is charged is a bit of a racket in my opinion.

Pascal is a very genuine , helpful person. We had some minor problems with equipment, some of it our responsibility and some of it his; he helped us through all of it in the most painless way and we are grateful for his professionalism.

The trailer is very nice, lightweight and has big windows. It was very easy to pull and was easy to maneuver while parking. We did had issues with the doors only be able to be locked from the outside and not from inside. We had problems with the battery not charging properly and then having a dead battery for most of our trip. The tailgate/cover didn't always stay up high enough to stand under and the cupboards inside the trailer would regularly open up while driving, sending anything inside them scattered all over the bed. Some of these issues could have been managed if we knew how to deal with them in the way of a proper demonstration, but unfortunately Pascal wasn't able to be there when we picked the trailer up to show us how to use everything. We also didn't have a 'walk-around' inspection of the vehicle before we left which ended up being an issue when we dropped the trailer off and we were told there was damage to one of the fenders during the time we rented the trailer. We didn't notice the damage before or after using the trailer and only used the trailer driving down roads and highways, so either the damage occurred during normal use or it was there before we rented it. Without the inspection prior, we were unable to prove any of this and were then forced to pay to have the fender replaced. This was very unfortunate as we didn't feel we caused the damage, or if we did, it would have broke under normal use and may not have been a very quality fender. Pascal seemed very nice, but after the experience we had with the damaged fender, we would strongly recommend doing a 'walk-around' inspection before renting this trailer and a proper demonstration of how everything works before renting.

The Droplet was so comfortable and cozy. Very easy to pull and set up. Amazing it comes fully equipped with Kitchen dishes pots and cutlery. Gas stove, electric cooler and AC. Amazing for such a compact unit.