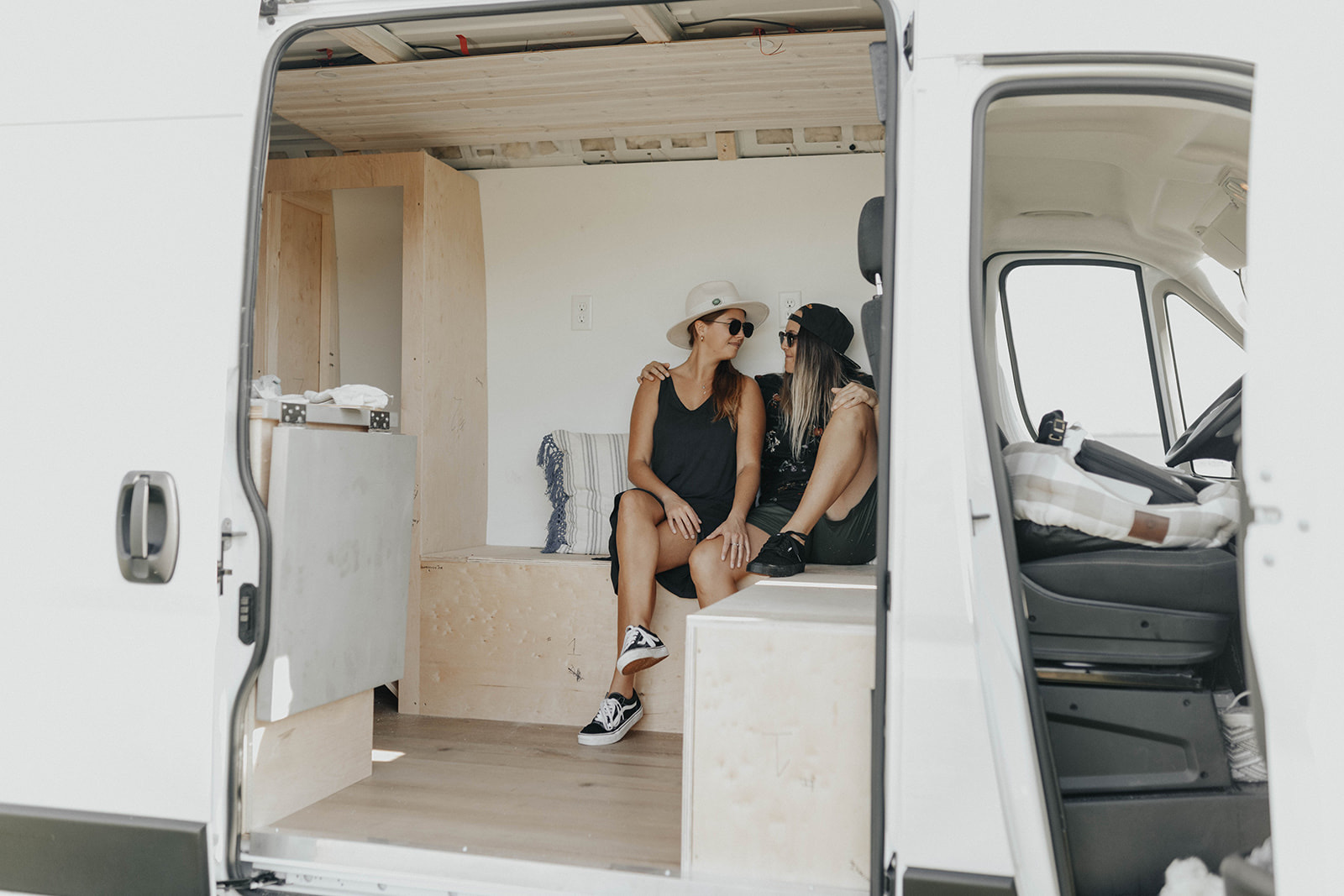 Hello, fellow travelers! Thank you for checking us out. My girlfriend, Shauna, and I designed and converted our camper van, Ruth, that we have been living in the last year. We are both flight instructors who took some time off work (thanks covid) to travel the west coast. We have been having so much fun traveling from Florida to the west coast, but now it's time for us to share our love, Ruthie, with others. We have a 15 lb Maltese/terrier rescue, Kylo, who has been along for the ride with us. We even custom made him a middle console to sit on while we're driving. So I'm sure your fellow fur companion will enjoy their stay. We are very easy going people and love to have a good time outdoors enjoying the beautiful sights. Living in this van has been a literal dream come true for us and such an amazing adventure. Check us out on social media for more real life living in a van and videos: YouTube - Sarah and Shauna Instagram - @shaunafelice @sarahbrookclark

Memories made on trips with Sarah Clark's RVs

We had an awesome time taking Bertha around northern New Mexico! She is a strong, tough, old broad with a ton of stylish and thoughtful touches. We definitely needed the propane heater on the colder nights, and a big thanks goes to Shauna for providing that for us! We didn't end up using the kitchen much, so I can't speak to its quality, but the bed and seats were comfy. Van life was great for this vacation!

It was also nice that we only had to pay the tent fees at campsites instead of the full RV prices, and we got to park anywhere with ease. We'll definitely see Bertha again if we go out to New Mexico again.

Ruthie took us on a grand tour of New Mexico: from Albuquerque to Santa Fe to Jemez to Las Vegas to Taos and Chimayo. Smooth driving and spacious layout made for a comfortable week. We also got a great orientation up front and our questions answered on the fly. Thanks, Team Ruthie!

We had a wonderful time exploring the southwest thanks to Ruthie the Van! It was conveniently laid out and included all the amenities we needed for a week of van-camping. Sarah was also a great and communicative host.

I initially had a good experience which turned into a bad one. I rented this van for 29 days but returned it early on day 19 but still paid the full 29 day rental. I was charged for damages which the owners never sent me photos of after I asked multiple times for pictures. I was charged this after my security deposit was returned. They also didn't tell me the van was apparently damaged until days after I returned it to them, and after they had been driving the van.

I was also asked to pay for hundreds of dollars in mileage fees, *because* I returned the van about 10 days early into my 29 day rental (even though I paid for the full 29 days, they calculated my mileage limit at the day I returned it). It made no sense for me to rent and pay for the van for 29 days but not have the mileage allotment for 29 days, and this charge was a total surprise. I felt like I was punished for returning it early and ended up paying an extra $300 on top of my rental for reasons that still don't make sense to me. Document everything on return, don't return it early, and do better than I did, if you rent this van.

This was our first time renting a van and touring the SW, and we had a great time. The van was comfortable and big enough for me, my wife, and my daughter. It performed admirably on the road. We'd definitely rent it again!

Our trip was amazing, and Ruthie was a huge part of why. She was more then accommodating, she was comfortable, road great and for filled our buck list trip to New Mexico.

We spent 2 weeks touring and camping in the beautiful Southwest with Ruthie. We had a wonderful time and Ruthie was perfect for our needs. She drives great and offers all the comforts needed. There was plenty of storage for gear. Sarah and Shauna were great hosts and were helpful with answering questions quickly while we were on the road. We highly recommend Ruthie for a taste of the vanlife!

Ruthie the van was absolutely exceptional! We spent 6 days traveling with her through the mountains of New Mexico and she was an absolute trooper!

The owners were extremely accommodating/answered all of my annoying texts leading up to our big vacation.

Would HIGHLY recommend Ruthie for your traveling needs. It’s got everything you could possibly need and more.

Quick tip: this is NOT an off-road vehicle. She will get stuck in soft sand (we learned that the hard way)

What a great van - clean, smooth ride, and great turn over. If you need to rent a van to tour around in NM, this is the one! Definitely recommending to everyone!

Me and my friends had such a great time in Ruthie. She was exactly what we needed for a weekend getaway.

Ruthie was perfect for our long weekend trip to New Mexico and Sarah was an excellent host and very communicative. The van actually gets pretty good gas mileage which was a plus and very easy to handle! It was cold during the time of our trip so we didn’t even need to turn on the fridge and had ice in there for nearly 72 hours without it melting! The space heater heats up the entire van nicely but the propane needs to be changed out every 4-5 hours which is no big deal. Overall great experience and I would absolutely use Sarah and Ruthie the van again!!

The hosts were gracious and very helpful. They picked us up at the airport and made it so easy. They also provided all the extras we may have needed. The Van was new and very easy to drive. It was very maneuverable making it easy to find places to park and stay the night. We enjoyed the Van Life and had so much fun road tripping around NV and AZ.

3 Photos submitted by Sarah B.