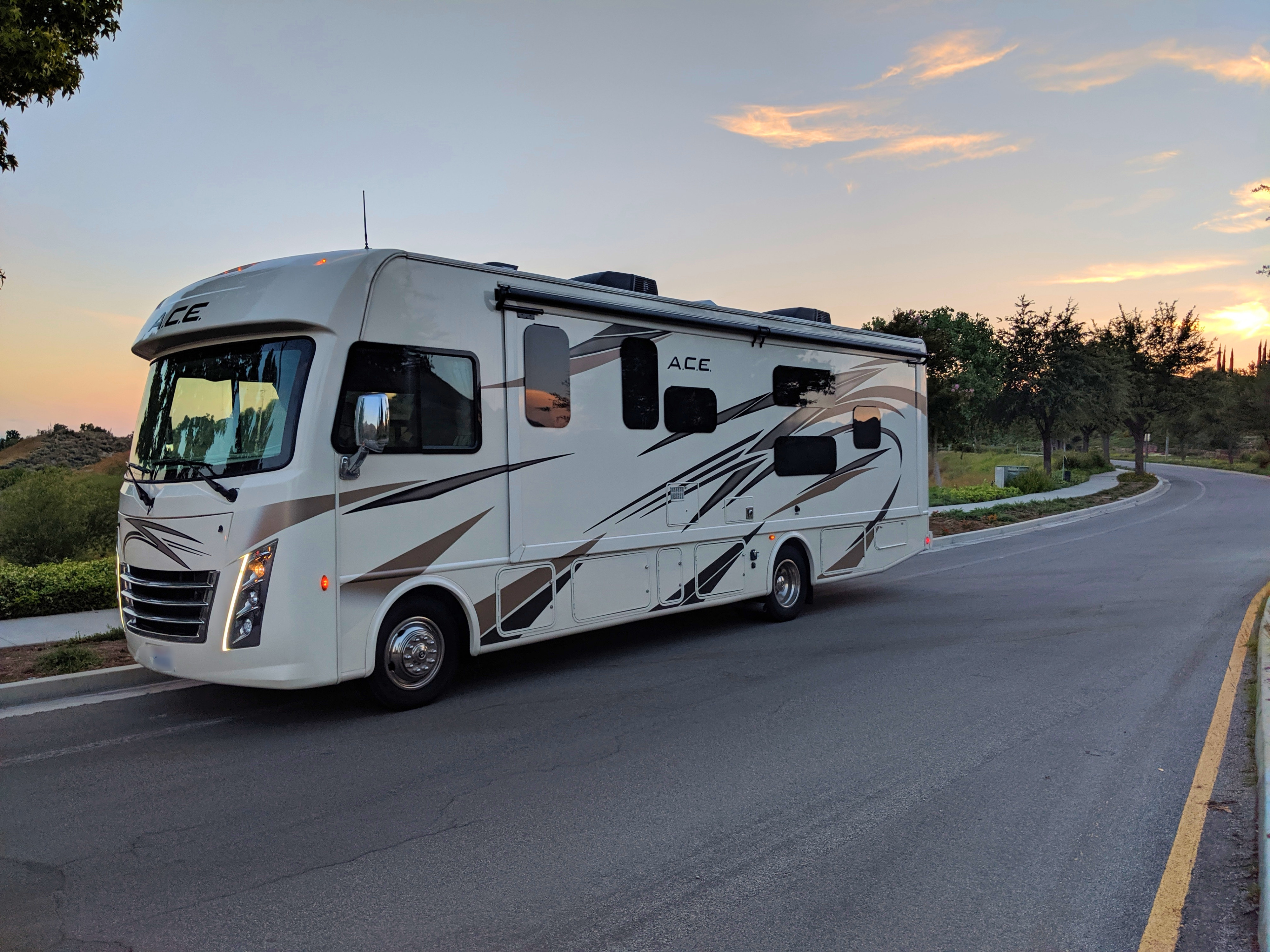 5
98% response rateTypically responds within an hour

About All An Adventure

Hi! We are the Allan family. We have 3 children and are a zany bunch. We love to explore the open road and have a taste of the culture wherever we go. We are huge sports enthusiasts. We enjoy football, soccer, and of course, the ol' past-time of baseball.

5
98% response rateTypically responds within an hour

Memories made on trips with All An Adventure's RVs

We rented 2 RVs from Michelle & Scott. Both were super accommodating and provided everything we could possibly need. The Allans were amazing to deal with, answering all my rookie-RV questions, delivering both vehicles and teaching us how to use everything on board. We felt very taken care of and were able to host our friends and family for a super fun adventure. Would definitely rent from them again!

It was just as I was hoping to get. Michelle delivered as promised. And even though there was a slight water pump issue - she took care of it within an hour to make sure my trip is not interrupted. In the past other owners would just refund the money and that’s it leaving me with no choice but to cancel my plans. Not Michelle and Scott. I have already booked another trip with them. These are the owners you want to rent your RV from. It was also clean and grill and chairs were provided.

Michelle and Scott were such a pleasure! The RV was amazing. Amazing communication, very responsive and flexible. Had the RV delivered close to camp site. Super easy to book, work with and drive. We have booked rentals before, this was by far the best experience. Very professional and accommodating. Thank you both for bring friendly and timely. Would definitely recommend. RV was roomy, plenty of space, hook ups worked, slide outs were fully functional, as well as heater, kitchen appliances and TVs. Thanks again for a wonderful weekend adventure.

We had a phenomenal trip in “Dorothy,” our 23-foot home away from home for two weeks. We drove from Santa Barbara to Breckenridge, with many stops along the way in the national parks throughout Utah. Dorothy was incredibly reliable and comfortable for our family of four, and it was the best trip our young children have ever been on. The RV was very well appointed with everything you need, and all the beds were very comfortable. The air conditioning worked great, the bathroom was very clean and easy to use, and all the utilities worked great. The RV was easy to drive and ran very smoothly. We had zero issues of any kind, and we found the RV very easy to drive. It was easy to maneuver on windy roads and had plenty of power going up hills. In general, it felt very safe to drive.

As for our experience with Michelle, I cannot speak highly enough! She delivered the RV to us and was very patient to teach us everything we need to know. She is extremely knowledgeable, and she made herself available to answer questions throughout the trip. She was extremely responsive by phone and text, and she immediately helped us solve every minor issue we had on the road. When our trip was completed, Michelle went above and beyond to fly to Colorado and drive the RV back to California. She even delivered our camping equipment back to our home as we were flying home and couldn’t fit everything in our bags. She truly made it an incredible experience for our family!! You are in great hands with Michelle and her company.

Working with Michelle and Scott was the best. They were totally helpful, communicative and easy going. I couldn’t ask for better hosts and I’ll definitely use them again.

Probably the best holiday we ever had! Scott and Michelle are very easy to deal with and very helpful. The RV was a great place to stay and I wouldn't hesitate to book this trip again :) My son loved staying in the RV. It was pleasant to drive. I managed 14.5MPG (USA gallon) 17.4MPG (UK gallon) which considering the size of the camper I thought was quite reasonable. The RV Was clean, everything worked as it should and both Scott and Michelle were there if i had even a small query. I had reply quickly to any questions that I had.

We had a great experience! It was our first time renting an RV and I had a lot of questions, Michelle was very responsive and helpful! She delivered the RV and went over everything. It was a comfortable space for our family! Thanks again!

Renting an RV with All An Adventure was great. The process was easy and the owners were wonderful. Scott and Michelle were available for any questions we had before our trip as well as when we were on the road which was a huge help being this was our first time on the road in an RV. We look forward to our next trip!

Great experience from very beginning. Owners were very friendly and knowledgeable. We had a wonderful trip and will be renting again.

Our first Outdoorsy rental experience began with us finding an RV with unlimited mileage. The owner said that the listing of unlimited mileage was a mistake and that the app messed it up. We ended up having to pay for the extra mileage.

The owner walked us through all of the RV controls when she dropped off the RV. She showed us how to prop up the TV, which was broken from the stand. When not in use, she said it would be fine laying down on the top bunk (above the front passenger seat).

Once on the freeway, the TV started to slide out over the passenger seat and felt very unsafe. A cabinet also flew open and all of our food flew out. Some stripping on the outside of the RV was peeling off and as we continued to drive, it peeled off more and more. We pulled into a gas station to secure the TV because we were scared that it would completely slide out and hurt someone. We purchased a bungee cord to secure the cabinet that was broken and we fixed the stripping that was loose.

The listing said that the RV included a backup camera and when I asked the owner how to use it, she said that the backup camera was uninstalled a while ago because other renters caused 1000’s of dollars in damage by using the backup camera and not being careful. The owner said they could come pick up the RV or we could bring it back if we were dissatisfied. At this point, we were in another state-we had planned this trip for our daughter’s 18th birthday and we couldn’t just cancel the trip once we had started it.

To this day, the listing still claims that there is a backup camera. It also claims to have an outdoor shower but that is also a lie.

The ad on the Outdoorsy app claimed “your host is committed to a thorough Cleaning regimen informed by CDC guidelines” but the RV was far from clean. When my partner opened the door on the passenger side of the RV, she found a lollipop stick and a red braid on the first step. When we opened the pull outs, there was trash and dirt on the floor (more than the grime that was present on the other parts of the floor). The microwave was full of splatters. A prior renter had heated up some spaghetti or chili and red sauce was everywhere inside. Not to mention that the whole microwave was rattling and shaking like crazy the whole time we were driving because it was loose in the housing.

The back bedroom was not only missing a privacy panel, the floor between the bed and the wall was full of debris. The wall also looked like it had water damage which makes sense because at one point we had a small amount of water leaking from the floor at the wall. We don’t know exactly where it was coming from.

One of our biggest issues was the toilet clog. A few days into our trip, we found that the toilet was clogged and I sent the owners a message right away.

They asked if anything but toilet paper had been put into the toilet. We definitely did not. The owner also suggested that we pour water down the toilet. We tried pouring water in but it did not help.

Once we arrived at our next destination, the clog had not gone down so we rented a hotel room and started calling Outdoorsy customer support and roadside assistance for help. Outdoorsy was finally able to schedule a technician to to come out the next day. As the Outdoorsy representative instructed, I submitted the receipt for repairs to Outdoorsy for reimbursement from either the RV owner or Outdoorsy. (I never received a refund).

Before our trip started, when she dropped off the RV to us, she did not give any details about how often to dump nor how to generally care for the toilet/black water tank.

Many of these issues could have been resolved by having a manual or binder in the RV or even available online. We stay at many Airbnb’s and the home owners always include this. We were surprised that a home on wheels wouldn’t have this type of manual, especially for first time RV renters such as us.

The owner also did not specify that I had to bring the RV back with a full tank of gas. It didn’t say it anywhere in the listing, nor was it in our contract. Yet I was charged $187 for a full tank of gas which is much more than I ever spent on a fill up of gas at any stop during our trip.

After our trip, we had to go all the way to fair claims to try to get a full or partial refund from the owner for all of the inconvenience, including the repairs that were done. We only received a refund of less than $100 because the contract states that any repairs need to be covered by the renter and because we rented the RV as is.

1 Photo submitted by Jeff A.

Kids had a blast in the RV. Scott and Michelle are great to work with. They made the process very easy. Looking forward to future transactions.

1 Photo submitted by Christian A.