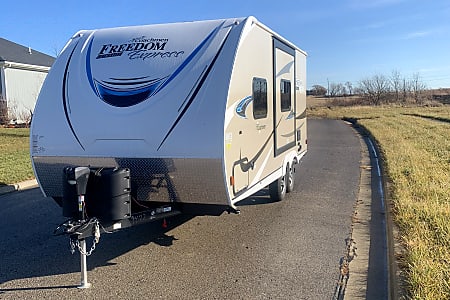 Memories made on trips with Midwest RV Rental's RVs

laid back. Helpful. Easy pick up and drop off. Didn’t add a bunch of little extras. Will definitely be our go to rental company

Sweet little camper. Easy pick up and drop off. I would do this again.

Wes is great to deal with which is why we have booked with him 3 times in 2021 (so far). Flexible with pick up/drop off which makes it super convenient. Nice trailers and responds immediately with any questions you have before or during your time.

Very helpful. And accommodating pick up was a breeze along with drop off RV was in perfect shape no problems whatsoever everything worked wonderful. Thank you to Midwest RV for making our trip a great one

Very nice camper we had a great time !
Very easy to rent we will definitely rent from here again!

Easy drop off, clear communication. Nice space with all the comfort on the road. I recommend it.

It was a good time. Lots better than a tent. Helped us on what / how to do. Everything worked as it should. Would definitely recommend & will be using again.

Great Camper for two. We have rented it twice and have had a great experience both times. I have a Honda Ridgeline and it pulls great without having to use sway bars.

This rental was easy and efficient. Pickup was quick and as expected. Trailer was clean and had everything we needed. Drop off was also very easy and quick. Thanks for a great rental.

Easy to work with. Replied quickly to questions. Camper was clean.

Wes was great... he very responsive to all our requests and needs.

Wes communicated quickly, even late (11pm) on a Thursday night when the furnace quit working. We thought the LP ran out, he responded by telling us to go to Walmart and get a new one. We didn't do that. Turns out the propane was fine (even switched to reserve), the furnace just was not working as far as we could tell - it came on briefly every few minutes for hours but never ignited. Spent the night in 30 degree weather outside huddled under blankets inside. We would have ranked cleanliness as a 5 star but the blackwater tank was full and we did not notice it until we were set up. It was not Wes's fault that it was not emptied by the previous renter but it should have been checked and emptied before we picked it up (and charged the renter a cleaning fee?) - we did however empty it even though we did not use it. The fact that it was brand new was really nice - since this was our first time renting this kind of trailer we got to see what a new one would be like. Got to experience the fun of emptying the blackwater tank! We also learned that we need to make a checklist of things to review to prevent issues before renting another RV like this.