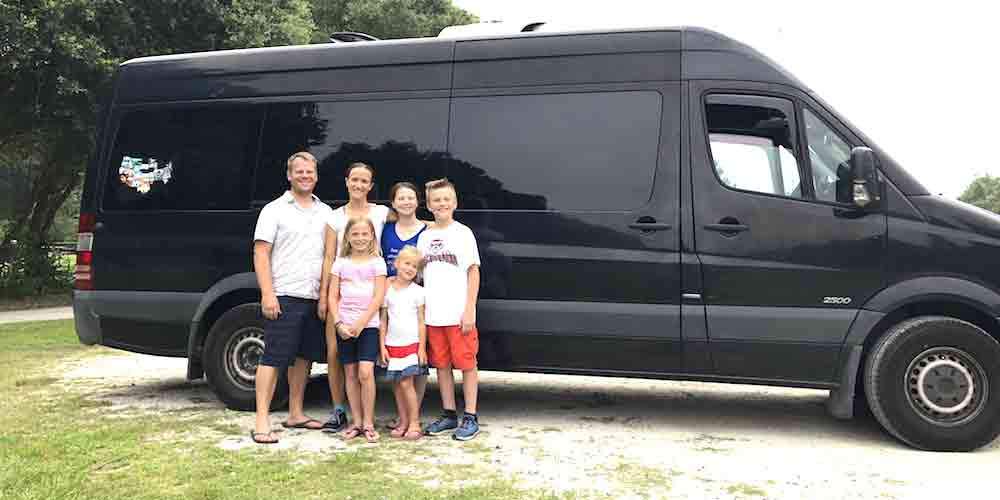 A Tale Of Two Vans

Outdoorsy Mapped – RV Rental Adventures From Around The Country

It was the best of times, it was the better of times. One was a 2013 Mercedes Sprinter van, the other a 2003 Volkswagen Eurovan Weekender. Perhaps dreamt up in a moment of foolishness, yet purchased in a moment of belief that adventure and family togetherness would be had.

This is a tale of two vans converted into campers, and the families who occupy them.

After years of road tripping in their Toyota Sienna, even spending nights inside the minivan when tents weren’t an option, this family of six decided it was time to make the move up to something with more room.

Jeremy and Leslie Howlett have long loved the outdoors and traveling. Leslie, a full-time registered nurse and ultra runner, loves getting out to see new sights both on the drive and by foot. Jeremy, one of Altra Running’s co-founders—who now continues his education while working as a brand strategist for various businesses—also has a yearning for adventure and travel.

Both want to share their love of moving along the map with their four children, and decided on a 2013 Mercedes Sprinter van with a 170-inch wheel base and a high top roof to help get the job done.

“We wanted something all of us could sleep in easily and quickly on the road whenever we felt like stopping so we didn’t have to worry about a campground or a tent or a hotel to just sleep in,” Leslie Howlett says. “We also wanted the ability to stealth camp and boondock when we’re in cities, and being in a fairly normal looking vehicle does that. This adds flexibility to drive and go wherever we desire without having to make prior reservations and feel pressed to have to get somewhere else before we are really done in one area—or have to stay when we’ve had enough and want to explore somewhere new.”

Even with a larger-than-normal van, the Howletts still needed to make some changes to make it less of a van, and more of an RV.

“Many #vanlife people convert their Sprinters into beautiful homes on wheels and we love drooling over their photos,” Leslie says. “Most of those people don’t get to haul four kids along too. Our van came with four bench rows of seats. We removed the back two rows and built two long, hinge top boxes that act as the benches for our table and when the table top is down, it’s our queen sized bed.” 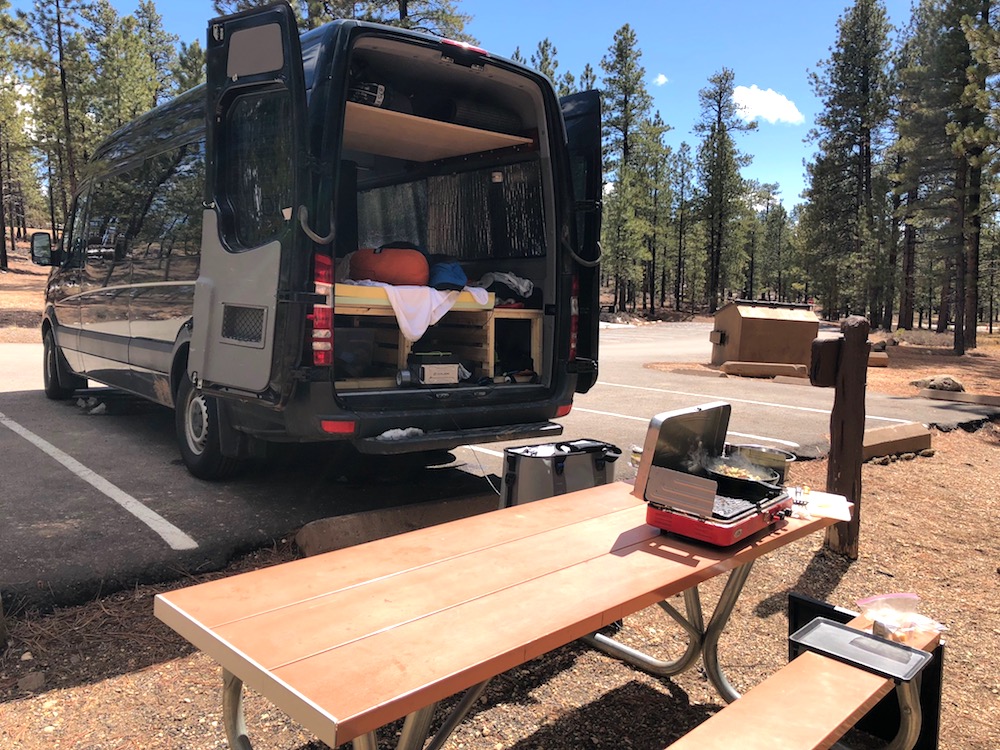 “We bought two youth-size cots and used camming straps to hold flat over each of the two benches for our big kids to have a separate sleep space and the cot makes it a little wider than just sleeping on the bench. Turns out though that our kids almost always elect to just throw a Thermarest down on the benches. We’re also able to fit a cot at the foot of our bed [that] our boy typically sleeps on.”

The Holwlett’s also installed a loft in the back for additional storage when they drive, and for a sleeping area for their youngest daughter. And while they don’t have a kitchen or bathroom setup, the Howletts have a portable stove, and stop at gas stations, stores and nature when nature calls.

“Our set-up is all modular and removable right now which is what we wanted—to feel out our own #vanlife and decide what works best for us,” Leslie says. “It also kept the build more affordable and allowed us to do all the work ourselves minus the fan we had installed. We weren’t quite ready to cut a hole in our precious Sprinter’s roof ourselves.” 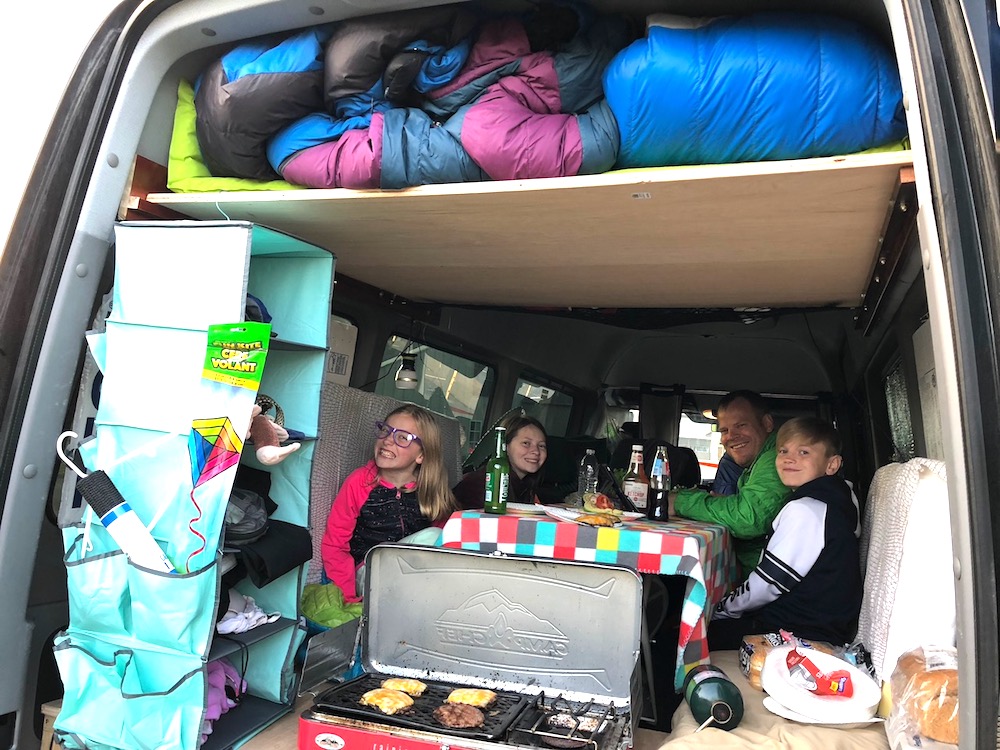 Since purchasing the Sprinter van in 2017, the family has been to San Diego, the Oregon Coast, Southern Utah, and is currently on a 3.5-week road trip traversing the southern U.S.

“We love being totally self-sufficient in the van,” Leslie says. “We can drive until we feel like it and find a rest stop, Walmart, forest service road, campground or even just a safe side of the road. The van gives us plenty of space and is surprisingly easy to drive. And it’s just fun. I look at it sometimes and just smile at its huge size and memory making abilities … that often include singing the entire soundtrack of Hamilton several times over.”

The minimalist lifestyle has long been important to Terral and Mary Fox. Owners of a minimal footwear business fittingly known as Unshoes, the couple and their four children try to keep life as simple as possible.

The family owns a homestead property where they have animals, a garden, and where they homeschool their children. Recently, the family added a 2003 Volkswagen Eurovan Weekender to help them travel in comfort while not abandoning their minimal way of living. 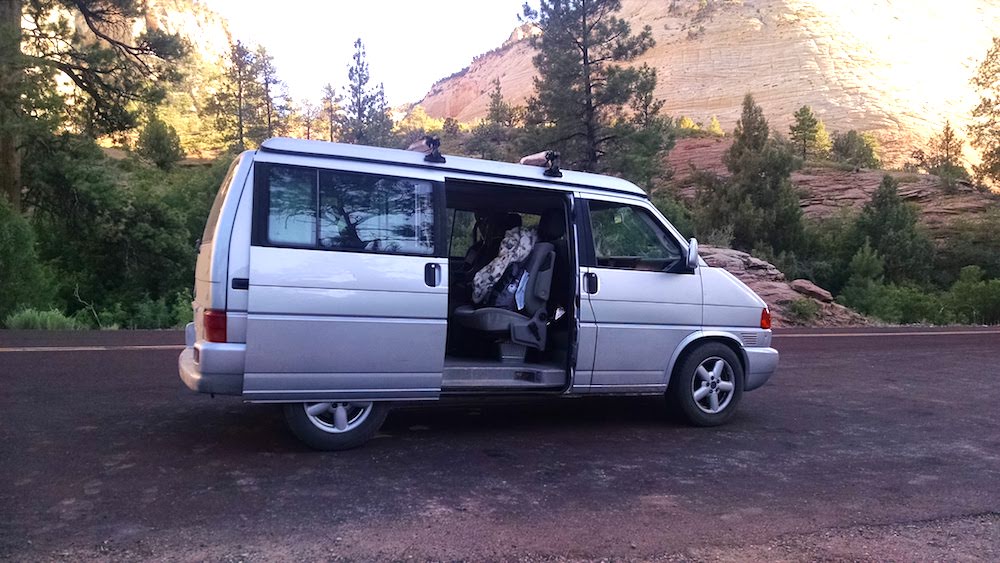 “We got this particular model because most campervans are set up for couples without kids,” Terral Fox says. “We wanted a van that could seat and sleep our whole family. There are five seats in the back, plus the two cabin seats. The back bench folds down into a full size bed and the top pops up. Our kids are still small so the three older are on the top bunk. We have rigged a small bed across the two front seats and that’s where the toddler sleeps. Then Mary, the baby, and I sleep on the bottom bed. It’s cozy, but it works!”

Terral says that while there are obvious limitations to sleeping in a van, it has given them a lot more freedom to travel as a family on a limited budget.

“Ultimately, we wanted to get a campervan to give us more flexibility with travel,” he explains. “We have had several experiences where we’ve needed to spend a quick night somewhere. We either didn’t want to pay for a hotel, or more often, we were out in the middle of nowhere. Setting up a tent and air mattress takes a long time and is difficult with children that are tired from travel and need to get to bed quickly. We dreamed of buying a small RV for a few years until we discovered the Eurovan.” 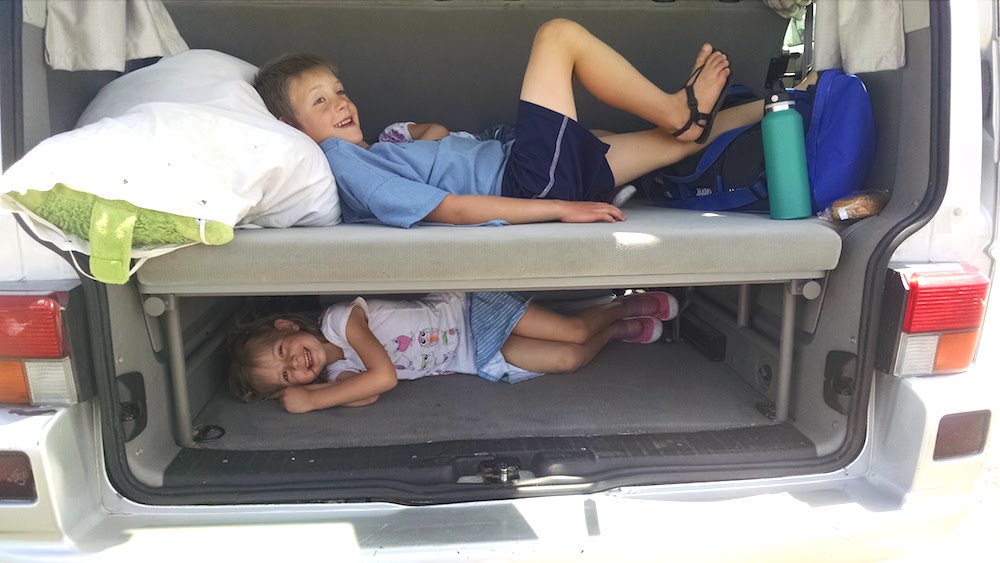 Since the family has not owned the van long, they have only gone on a few small trips, but Terral said they look forward to many adventures, and are thrilled about the homeschooling capabilities.

“We homeschool our kids and they are very interested in geology,” Terral says. “Our dreams are to be able to travel more and have more adventures while going to see some of the geological wonders of the western U.S. to support our children’s interest in geology. I am an entrepreneur and we have some flexibility in our schedule, so it makes sense to travel a bit more. We have a trip planned this fall to go to Arizona to see the crater and the petrified forest. In our old car, this would have been a much more difficult trip to pull off logistically.” 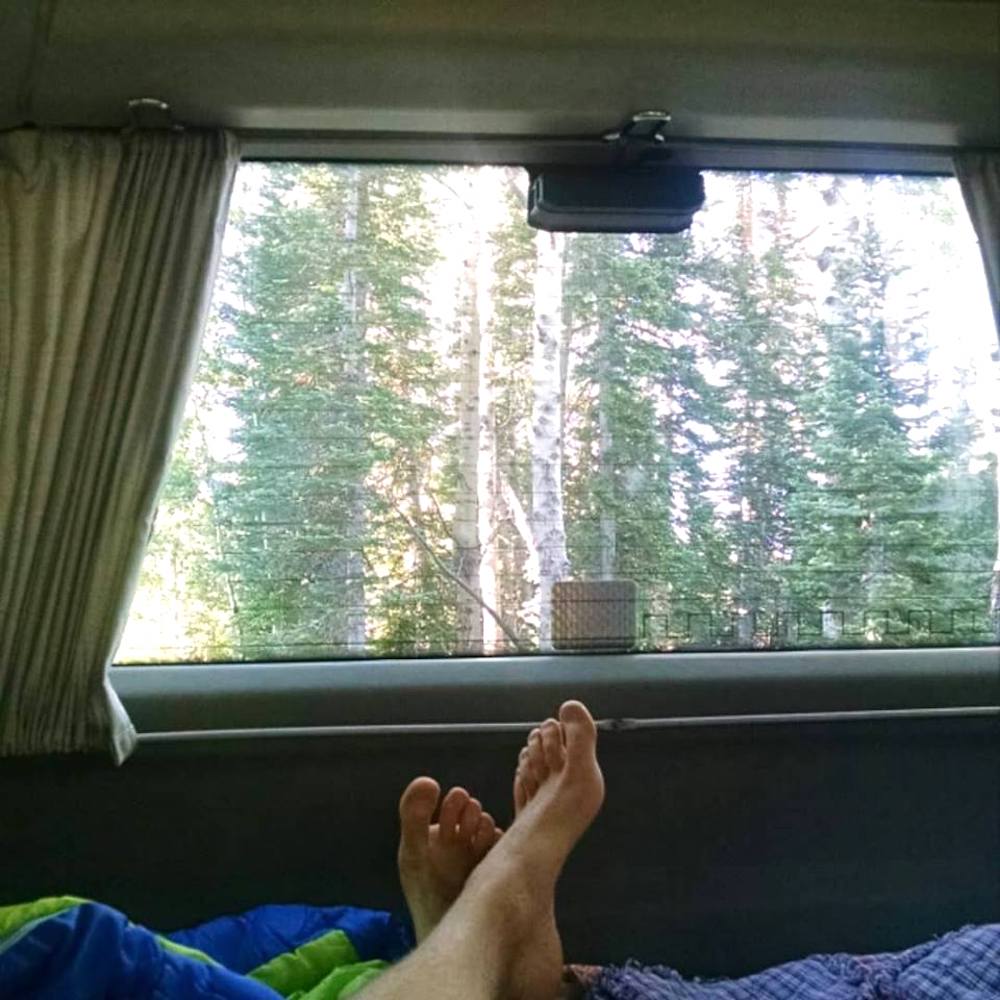