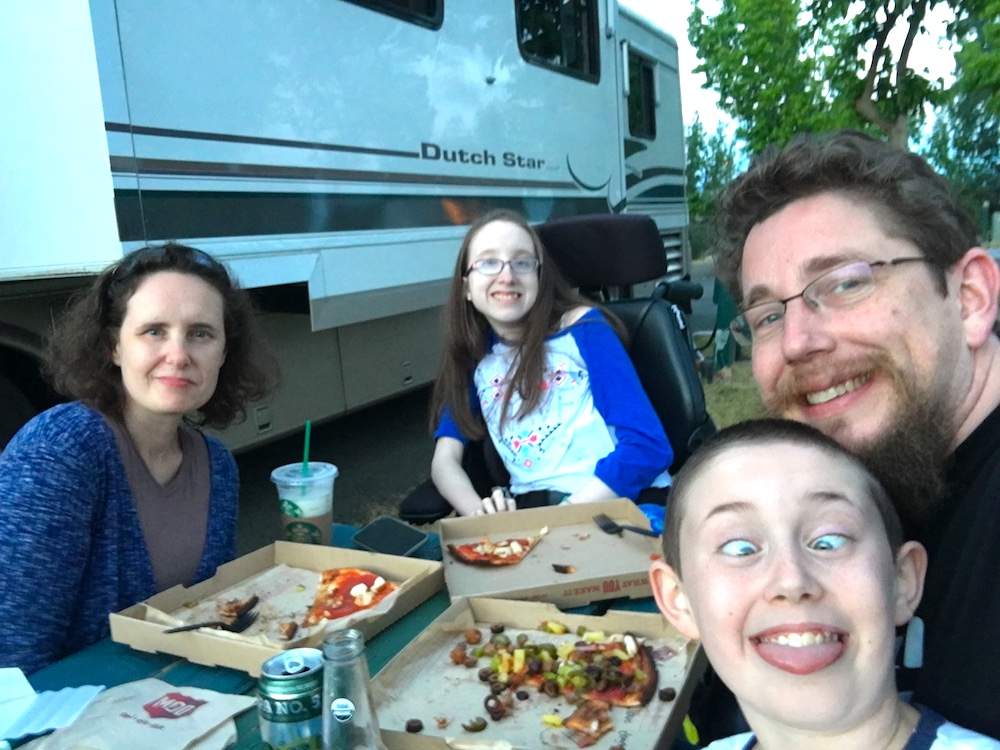 Defying The Odds To Pursue Their RV Dreams

What to Expect When RVing with a Baby

Ten years ago, Triann Benson heard the words no one wants to hear: cancer and terminal.

Doctors estimated she had about three months left before cancer robbed her from her family. Together with her husband, Eric, and their young children, Emily and Daniel, the Benson family grieved for all the future plans and dreams that would not come to fruition.

For those who have never received such a diagnosis, it’s hard to imagine how you would react, but the Bensons arrived at a place of acceptance and letting go. Fast forward time and a surgeon was able to remove her tumor and, after chemotherapy, the cancer appeared to be gone.

Seven years passed before the cancer again reared its ugly head, and this time her life expectancy was measured in weeks. Again, the family went through the grieving process—this time with older children who better understood what was happening. And yet again, the miraculous surgeons and life-saving procedures beat back the cancer.

The Bensons had defied the odds and beat cancer not once, but twice.

Triann’s diagnosis was not the first difficult conversation the Bensons were forced to have with doctors. Their daughter Emily, now 16, was born with spina bifida, a birth defect that causes a gap in the spine. She has faced many challenges in her young life, and uses a wheelchair for mobility.

If ever a family had sufficient excuses to stay home, lick their wounds, and give up on their dreams, it’s the Bensons. No one would blame them. But their response to their circumstances has been exactly the opposite. They live each day with the awareness that their time together is a gift. They know that life can be unexpectedly short, and there is no time to lose in pursuing their dreams.

It has been three years since Triann was given just weeks to live. Since then, the Bensons have sold their house and most of their belongings. They bought a Class A motorhome, a 38-foot Newmar Dutchstar from 1999, and have lived and traveled in it full-time since January 2017.

Why sell everything and move into an RV? “There’s a half a million answers for that,” Eric Benson says.

Among those half a million answers are reasons that are common to many RVers. They wanted to spend time together and slow down the pace of life. They wanted to visit amazing new places and meet interesting new people. But their biggest reasons are different than most, with a depth of clarity that can only be born from pain and hardship.

Facing terminal cancer twice brought a razor-sharp focus to what is most important to them, along with an ability to let go of the things that are not. They were no longer interested in the kind of life that most people would consider “normal” or “proper.”

Eric also describes his daughter Emily’s world before as revolving around the living room, kitchen, and her bedroom. While there was little they could do to change that, having their home on wheels allows them to change locations so she can experience much more of the world.

At the time, Eric’s job as a musician required a lot of travel and they realized there was nothing stopping them from traveling together. Emily and Daniel were already homeschooled, and because Eric’s gigs were in the evenings, the family could have the whole day together while he was on the road.

One day, as Eric sat in yet another hotel talking with Triann on the phone, he threw out the idea that maybe they should get a motorhome so that the family could travel together and spend less time apart. Triann countered that they would not be able to afford both an RV and their mortgage.

Facing a decision between keeping their home and belongings and the opportunity for more time together, the choice was clear. The house and stuff had to go. That one conversation changed the whole course of the Benson family’s life.

It’s right, but it’s not perfect

Full-time RVing brings its own set of challenges for anyone. From finding reliable, location-independent income to receiving mail to finding community, the Bensons face these challenges just as many others do.

They have a few added challenges though. Emily has a motorized wheelchair that she can use outside to get around, and a manual chair inside. Only Eric is able to lift her in and out of the coach between the two chairs. When he is working, she has to decide whether to spend her day inside or outside, and cannot change her mind later. While this is clearly not an ideal situation, they have yet to find an RV that allows her to come in and out independently while also allowing living space for a family.

Another challenge is how frequently Triann needs to visit her doctors in Texas. She admits it’s often difficult to be far away from her doctors, but she continues to get regular scans and has had a great experience with her oncologists.

“Don’t wait,” Eric and Triann say, both without hesitation. “Don’t wait for things to be perfect to do what you know you’re supposed to do. Whether it’s marriage or kids or moving.”

It will never be perfect. There will always be details to figure out and problems that are unsolved. “You do the best you can with what you have, when you can, and you adapt as you go,” Triann says. Otherwise, you risk missing out on so many of the possibilities life has to offer.

“Go follow your dream now, and if it’s not right then change dreams or change directions,” Triann says. “But don’t wait.”