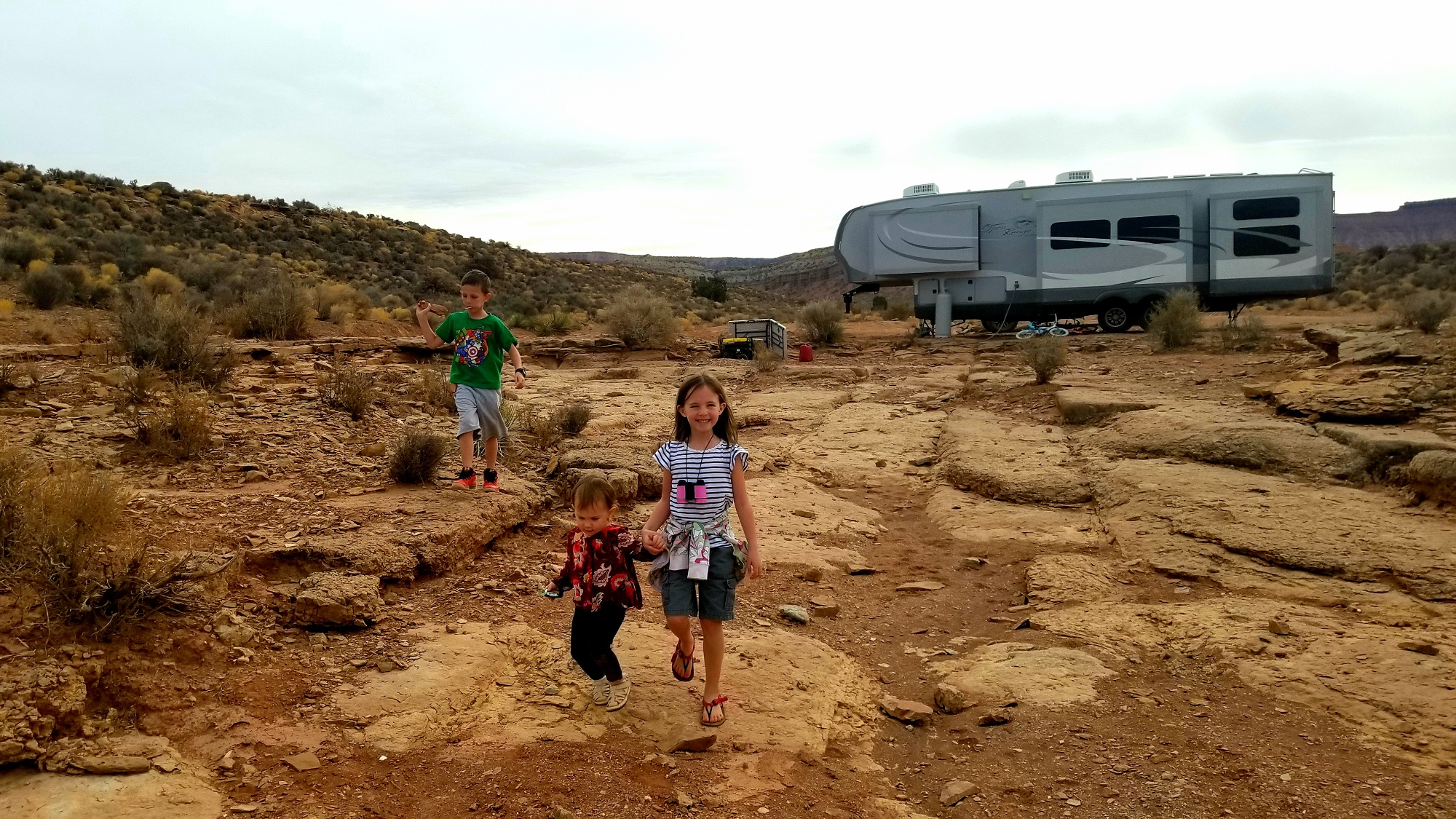 It was four years ago at an RV show in Florida that a chance meeting with an enthusiastic full-time RVer set the Gebbia family on a path most families only dream about. Chris and Heather were experienced RVers, already working remotely and homeschooling their two sons – Jake and Jessie – since kindergarten. But the idea of hitting the road full-time was daunting. 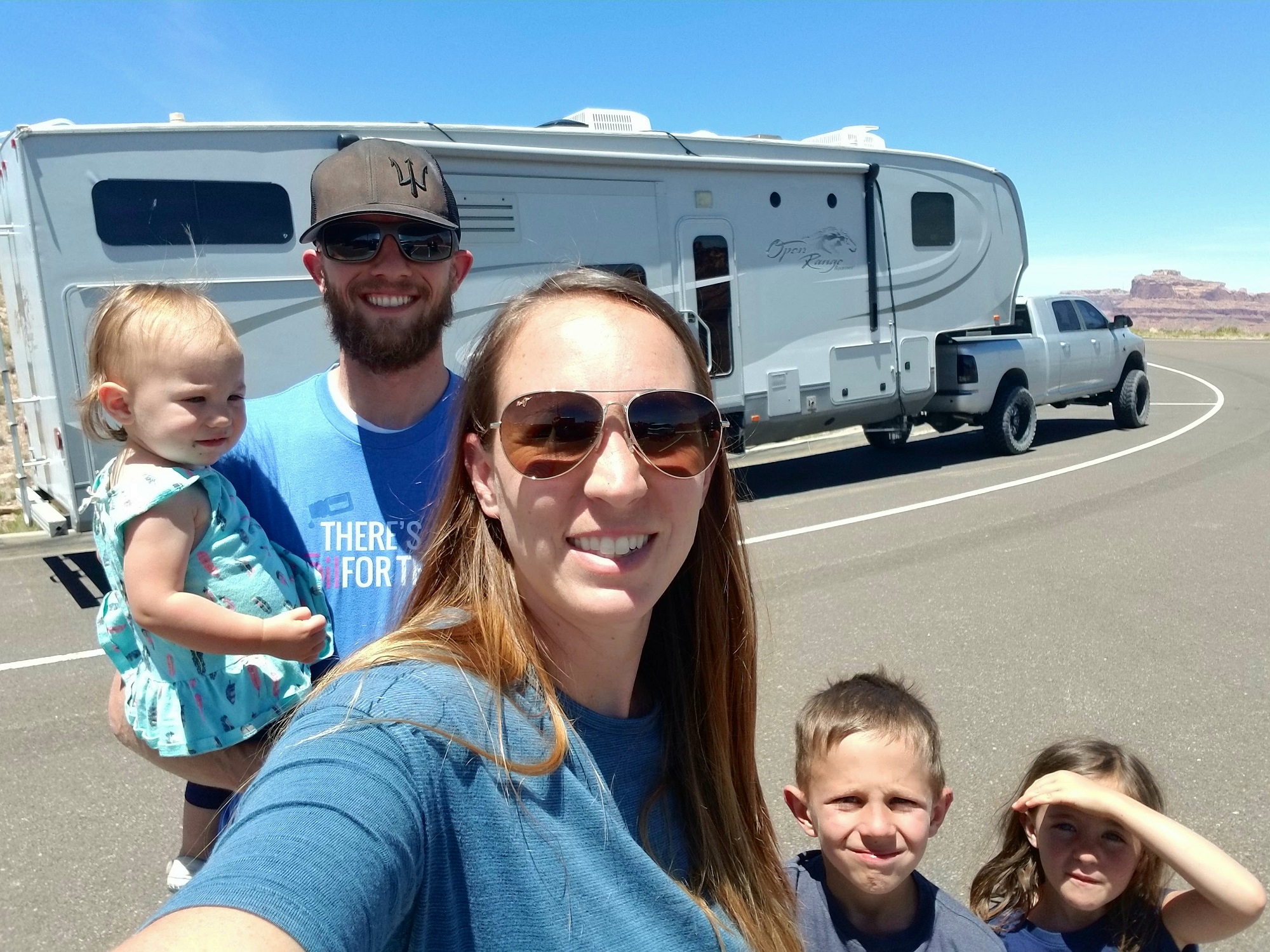 “We thought we’d be the only family with kids full-time RVing,” says Heather. “So we did an Internet search. We found this group called Fulltime Families with hundreds of families doing it. We started following their blogs and seeing all the interesting places they go to. That’s when we decided it looked like an awesome lifestyle.”

It took a year to sell their house and get their RV ready for life on the road. During that time, their older son Jake was all in, while his younger sibling Jessie resisted the change – but he did a 180 once they took the plunge. “The very first night we moved out of the house, he loved it,” says Heather. “He started saying he wanted to RV for the next 400 years!” 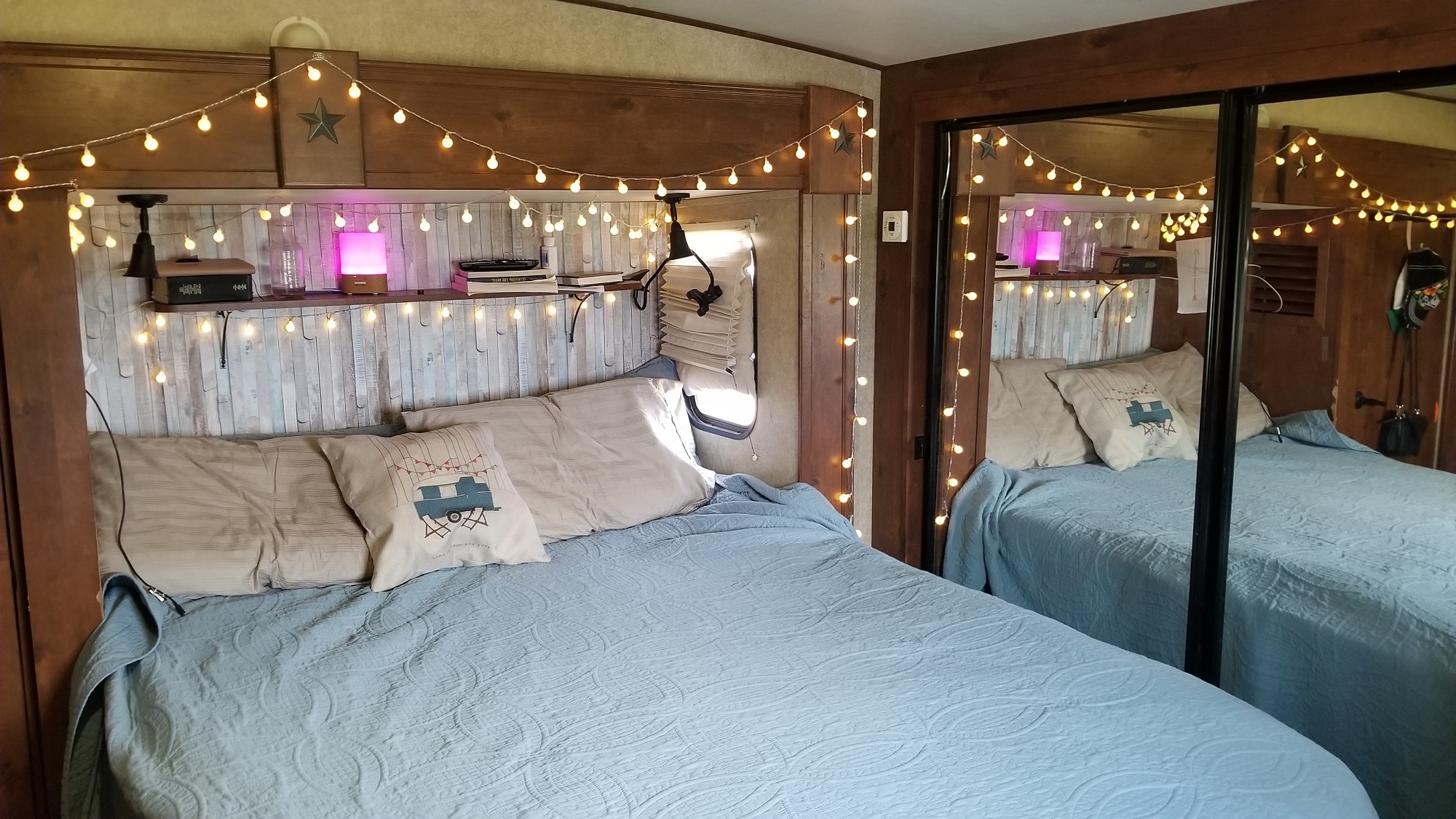 Still, she’s seen kids struggle to make the change. “Somebody who isn’t already homeschooling has to learn to homeschool and get used to a totally different lifestyle in an RV. It can be hard on the kids because their whole life is uprooted. It’s important to talk to your kids and make sure they’re on board with it.”

Not Your Typical School Day

Heather and Chris had always assumed their kids would go to public school. As they researched homeschool options, they got excited about the potential for their kids to learn in more interesting ways. “They’re not just memorizing facts and dates,” she says.

Early on, most schoolwork was done together. But as the boys have gotten older, they spend more time on independent study. At 14 and 12, Jake and Jessie typically spend a portion of study time on their computers working on subjects like math and coding. For some assignments, they connect online with other homeschoolers.

There’s no first, second, and third period for these boys. A typical day breaks down into two categories: table school, including subjects like writing, workbooks, art, and notebooking; and couch school, which means reading as a family, everyone’s favorite. Independent computer work usually follows at the end of the school day.

As you might expect in an RV, space is at a premium. They swap textbooks out from a library stored at Heather’s parent’s house and use laptops and e-readers as much as possible. Each day is a little different, with no set hours. “It’s very flexible and laid back,” Heather observes. “We can finish our school day in a few hours, then have the rest of the day free to do other things.” 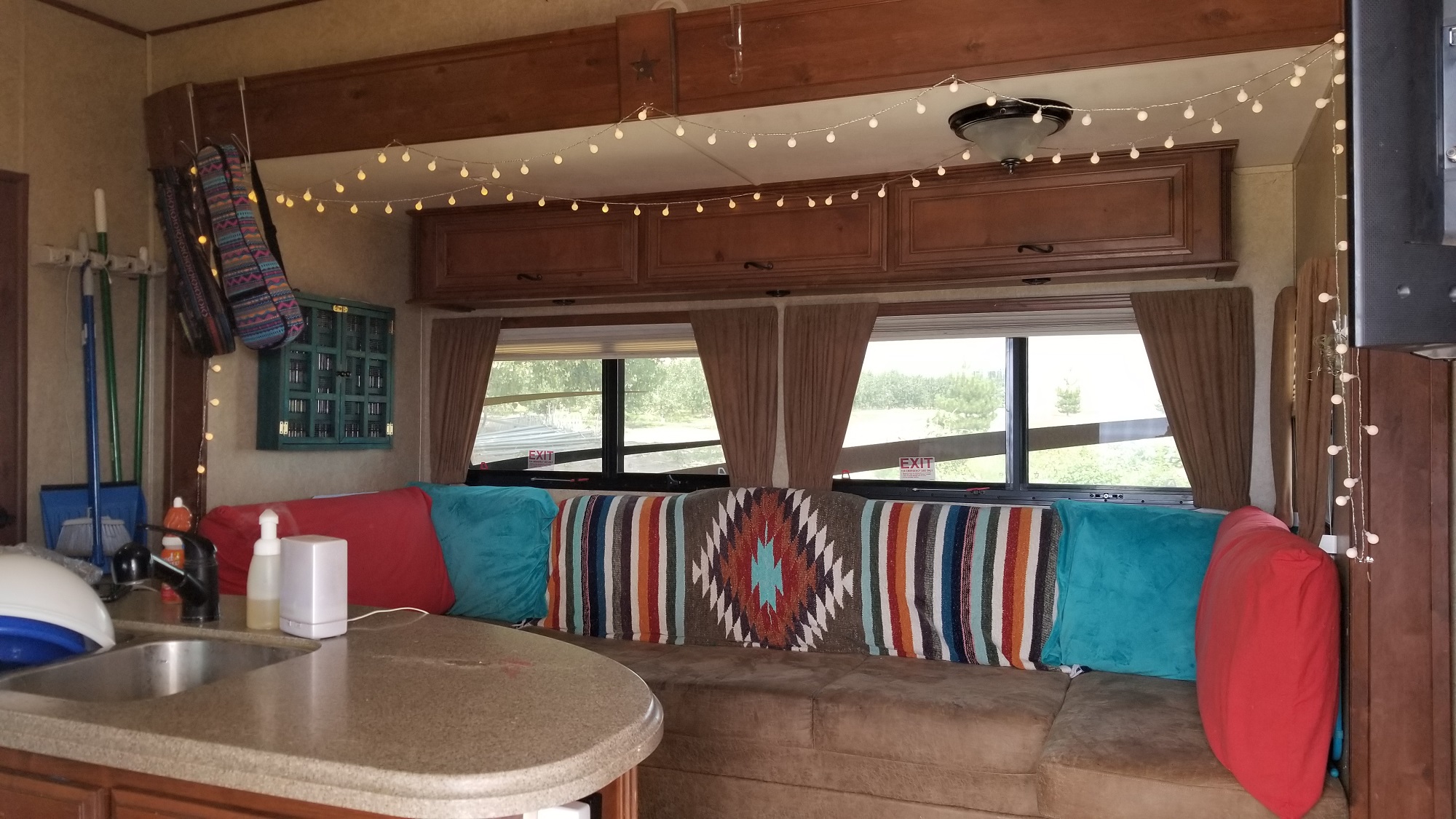 The biggest perk of RV homeschooling comes in the form of field trips. A mobile life means a constantly changing menu of museums, historic sites, aquariums, zoos, science centers, and national parks to work into the curriculum. The Gebbia’s capitalize on this with a museum membership that’s reciprocal nationwide.

National parks top their list of most educational places to visit. “The national parks have been phenomenal learning experiences,” says Heather. “We love hiking for hours. Every national park is so different, and Junior Ranger programs teach a lot of science.” The boys have earned almost 40 Jr. Ranger badges each.

Able to cover curriculum faster than in public school, the Gebbias can break from the traditional summers-off school calendar. Instead of visiting parks and museums at their busiest, they hit the books hard from June to August.  “It’s nice to go to national parks, museums, and other attractions when they’re not crowded and it’s cooler outside,” Heather comments. ”We actually do more school in the summertime than the rest of the year.”

Cities offer more great learning opportunities too, but it can be difficult to navigate in an oversized tow vehicle. The Gebbias solve this by finding campgrounds just outside the city with shuttle service to public transportation.

When they visited Washington, DC, their campground offered a craft to help the boys learn about DC transportation and attractions. A shuttle picked them up at the campground and took them to a subway station nearby. “We went to Arlington National Cemetery, did all the monuments, and went to Ford’s Theater,” says Heather. ”We even got a tour of the Capitol from our congressman.” In New York City, their campground was on the train line to Grand Central Station. “We went to the Statue of Liberty, the 9/11 Tribute Museum, Times Square, and Central Park. We love visiting a city that way.” 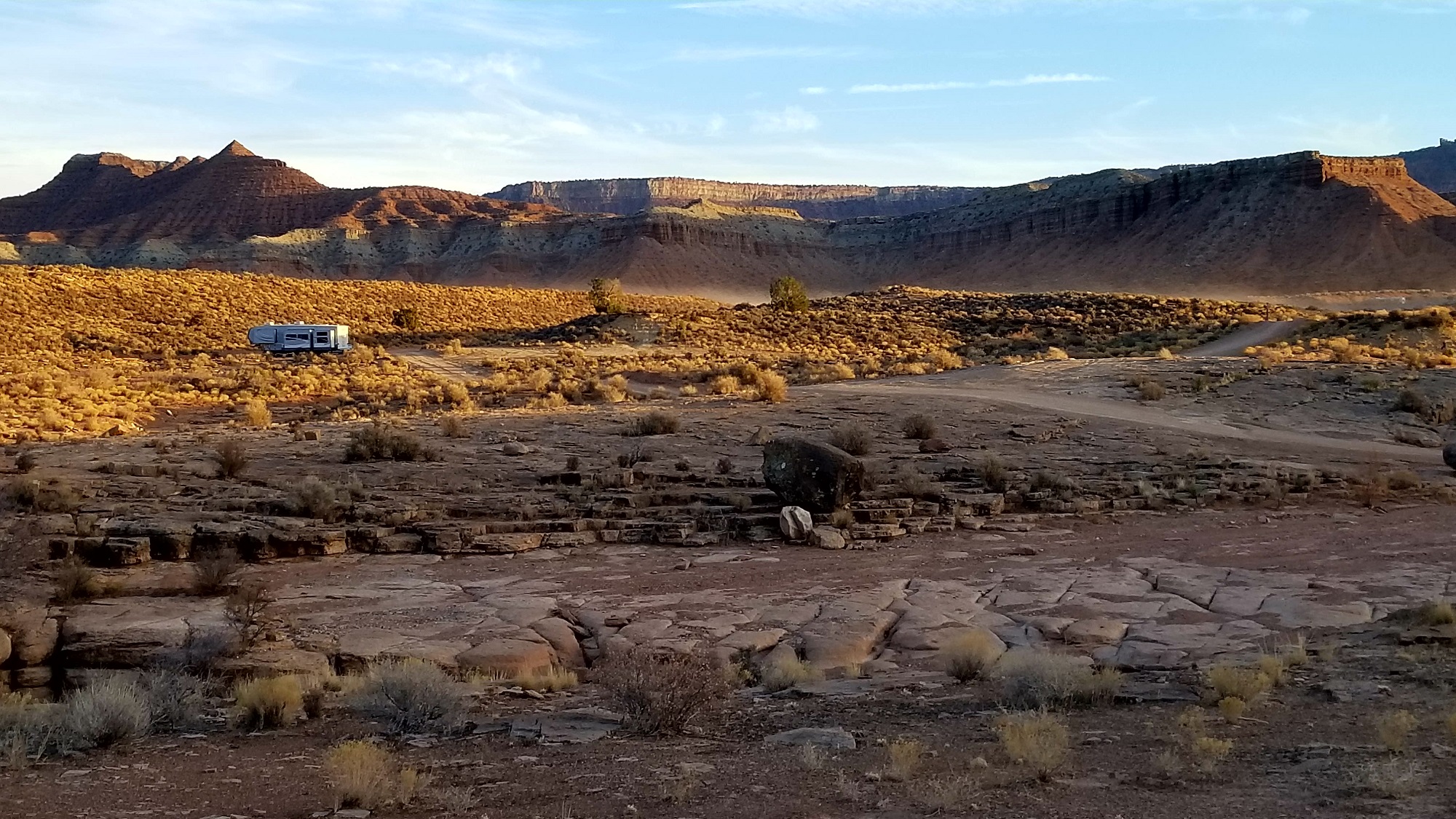 The Gebbias rely heavily on Fulltime Family’s Facebook group for advice from experienced homeschool RVers. As digital nomads, they pay for a Technomadia membership for the latest information on connectivity, cell carriers, and mobile Internet gear. For campground reviews, including ratings of cell reception at your campsite, they use a combination of Campendium and RV Park Reviews.

Previous Post « 3 Best RV Shows in the US
Next Post What’s In Your Van? The Tahoe 200 Endurance Run »