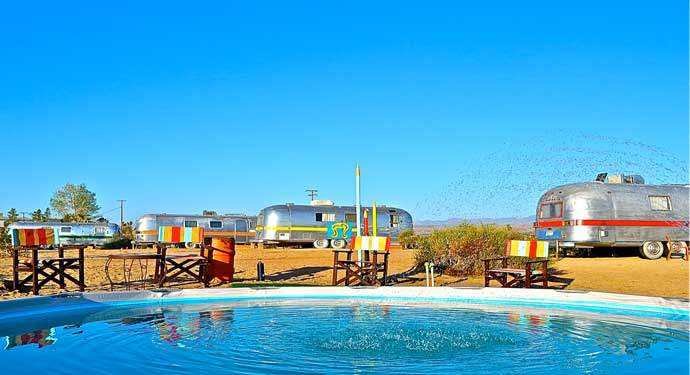 You don’t have to remember the 80s firsthand to be familiar with Kate Pierson or her band, the B-52s. With hits like “Love Shack” and “Roam”, this funky and colorful musical phenomenon brought their love of retro clothing and sounds into pop music culture in the  80s and 90s.

But it turns out that Kate’s love of retro style and adventure extends past her band’s image. The singer actually loves RVs and owns a collection of vintage Airstream trailers in the Mojave Desert, as well as a collection of cabins in the Catskill Mountains of New York. The artist and her wife, Monica, created two dream getaways that’d make anyone want to book a spontaneous trip.

Before there was a Lazy Desert in California, Kate was lending her creativity to her Lazy Meadow accommodations in New York. This was a boutique hotel before they became a fashionable phenomenon, and is a popular spot for glampers, designers, tourists, and all manner of adventure travelers. Instead of RVs, this is a collection of cozy, rustic cabins decorated with retro colors and other designs, dating from the 1950s and ’60s.

You’ll see several pieces of inspiration from the real-life Love Shack here, as the ambiance is very similar to that of the classic video. The cabins are a destination in and of itself, but also make a perfect “treat yourself” stop on a longer road trip.

Kate took this same idea to California a few years later. However, it was only by accident that the new park became a haven for vintage trailers. Originally, the Airstream trailers in California were a part of Kate’s Lazy Meadow in New York. After a few disastrous floods, Kate and her business partners decided to move the trailers across the country to the cozy town of Landers, California.

Kate’s Lazy Desert in Lansdale, California is where you’ll find several restored and renovated vintage Airstream trailers. Like the cabins in New York, each is uniquely designed in a vibrant, retro style. 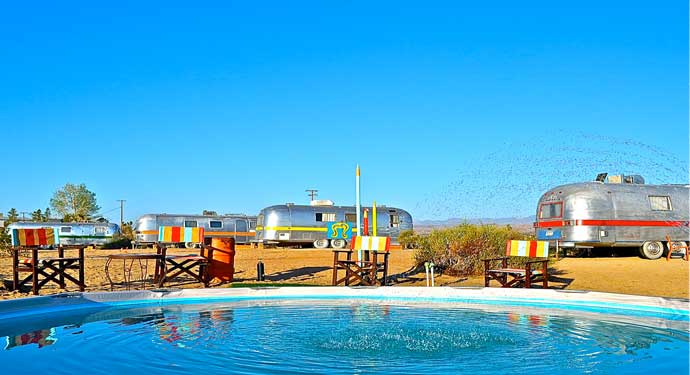 Landers is a small, idyllic city, only a few miles away from Joshua Tree National Park. Kate was visiting friends in nearby Los Angeles when she came across a small plot of land that was already being used as a private RV park. This romantic sandy vantage point became Kate’s Lazy Desert, nestled among the dunes of the Mojave. There are currently six vintage Airstream trailers in the park. Each has a different theme and distinctive name that describes the decor.

For example, the Lava trailer is designed to make you feel like you’re inside a funky lava lamp, the Hairstream was inspired by Kate’s own dream of a perfect dressing room, and North to Alaska is decorated with features from its long journey from south to north and back again. 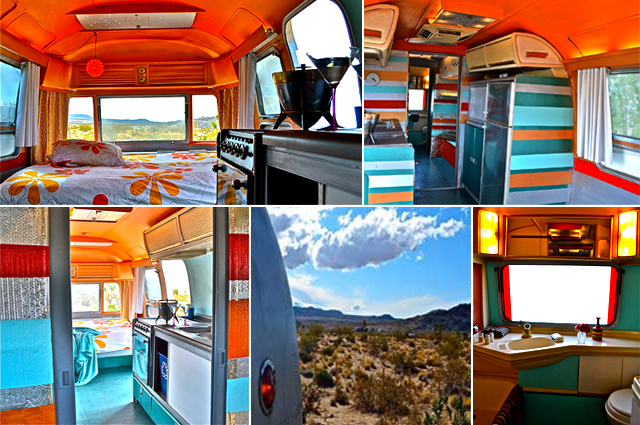 Each is available for nightly stays, but the trailers are stationary and never leave the park. They are simply far too precious to vintage RV enthusiast who owns the place. (But, Kate, if you’re reading this, Outdoorsy would be a great place to do it if you did ever decide to rent them out.)

One of the best things about the Lazy Desert is that it’s close to Joshua Tree— six miles, to be exact! This makes it a perfect home base for exploring all that the famed national park has to offer. If you’re staying at Kate’s, Joshua Tree is an absolute must-do.

Other Attractions Near Kate’s Lazy Desert

You may be in the desert, but there’s no shortage of activities nearby. Explore the town of Landers by day and end the day with a star party with the Riverside Astronomical Society. If you like art, make sure to stop by the Noah Purifoy Foundation and their outdoor sculpture museum. The Hi-Desert Nature Museum also has some great exhibits that will open your eyes to the history and science of the area. Foodies find delectable eateries of various cuisines not far from the park.

Try It for Yourself

It turns out that the vintage style we saw in the videos and on-stage wasn’t far from fantasy. Whether you’re a fan of glamor camping, rural California dreamin’, vintage RVs, or 1980s and 90s pop music, you can “rocket through the wilderness” like a star in the cool RV motel owned by the funky Kate Pierson.