Bec and Gary, the couple behind the Instagram handle @we_who_roam, have been traveling throughout Australia in their converted, big red Sprinter van for the past year. Their thoughts on settling down and saving for a house? Let’s just say, that’s not happening anytime soon.

Outdoorsy: Tell us a little bit about yourself. Where are you from and where are you going?

“We’re Bec and Gary and we hail from the Mornington Peninsula in Victoria, Australia. Our story beginning is pretty cliche. We were both working passionless 9 to 5 office jobs, paying way too much in rent—while saving for a house and a future that society expected of us, which truth be told, we had absolutely no real interest in.

We wanted to shake things up completely and try living in a different way (because hey, life is short and what did we have to lose?). So we bought a big, red ex-Australia Post van, built it into a home, and now we roam around the country, just figuring things out as we go.

We don’t really plan much anymore (very different to our previous, house-dwelling selves). We just like to let things unfold as they will.

Soon we’ll be heading westward, through South Australia and Western Australia, to see what we can find there.”

O: How long have you been on the road?

“We’ve been living in the van for almost 1 year now. We spent 7 months traveling the east coast and Tasmania and the last few months based on the Mornington Peninsula working.”

O: What was important to you when choosing a vehicle? And how did you end up with Big Red?

After a lot of research we found the Super-high roof Mercedes Sprinter was going to be the best option for interior height. We spent about 3 months searching for the right size sprinter van within our budget. We finally found our big red van on the Carsales website for private sale. It was over what we wanted to pay at first, but we kept an eye on the sale and after the price was reduced, we jumped in and snapped it up.”

O: Have you made any modifications to Big Red? If so, what was that process like?

“Between working multiple jobs, we each spent almost every spare minute over roughly 12 months converting our big red van from an empty shell into our full time mobile home. We installed insulation, solar power, batteries, cabinetry, storage, plumbing and more. There were no set manuals or guides on how to convert a van, so there’s always a bit of uncertainty over whether you’re doing it correctly, or if it will work out how you’d imagined.

Neither of us had any real DIY experience either, so there was a lot of learning on the spot! Despite that, we both really enjoyed the outfitting process. It was wonderful to see it all coming together bit by bit.”

O: Looking back, is there anything you would do differently?

“Overall we’re pretty happy with the choices we made. There are only a couple of things we would have done differently, like maybe choosing slimmer solar panels which would have allowed us to install a second roof fan/vent. And perhaps installing built-in water tanks instead of the smaller removable tanks we currently use.”

O: Real talk. What’s it like to travel with your partner full time?

“Most of the time it’s fantastic. Obviously there’s times where we might disagree, but we generally get along really well.
It’s important to allow each other time to do things apart, like one of us might go for a walk or go fishing, while the other hangs around the van reading a book or watching a movie.

If we have an issue, we usually try to address it straight away. Holding a grudge just doesn’t work in this situation!”

O: What’s one piece of advice you would give to other couple’s thinking about traveling via van or RV?

“Don’t cheap out on major components of the build. We had a cheap power inverter almost burn our van down only 2 months into traveling. Every emotion, high and low, is heightened when you’re traveling, so a bit of extra patience and communication never goes astray. Try not to focus on any little things that bother you—in the big picture, they’re really not important, and they’ll just dampen your experience and your day.

And try to remember that while you might be spending everyday together, that doesn’t mean you’re one and the same person. It’s perfectly fine to do your own thing.”

O: What Australian destination has surprised you the most?

“We were blown away by just how busy the east coast is. We can’t remember arriving at an empty campground the entire time from north east Victoria all the way to Cape Tribulation. It’s not necessarily a bad thing. We met plenty of interesting people and there was always lots to do.

We were also surprised by how incredible Tasmania is and wondered why we hadn’t been sooner. It’s an astonishingly beautiful place, and despite its small size, the landscapes vary drastically from tropical white sand beaches to snow-capped mountains.”

O: What Australian destination would you suggest skipping?

“You know, we can’t really think of anywhere that we think deserves to be skipped. We try to avoid cities in general as they’re not really our style and parking the van there would be a nightmare.”

O: How long do you plan to be on the road?

“We really don’t have an end date in mind. We’ll just keep going until we get tired of it.”

O: What advice would you give someone looking to explore Australia by van?

“Make sure your van is self sufficient. Spending $30 to $40 a night in caravan parks will dramatically shorten your trip. And invest in a couple of decent fans at a minimum, as there’s going to be some guaranteed hot weather sooner or later!”

O: What are your 5 must-have items for van life?

1. A good camera. This is the time to get snap happy!
2. A phone on Telstra. The coverage of some of the other networks is actually embarrassing.
3. A fan or two
4. Netflix and/or a hard drive with lots of movies and TV shows. When it’s pouring outside and you’re in the middle of nowhere, you’ll thank us!
5. The WikiCamps app. We love it.

“One extra must-have: An open mind. Disregard your expectations on what a place or experience will be like, and just try to embrace it how it is. You might be pleasantly surprised!”

O: What’s surprised you the most about life on the road?

“How many other people there are doing a similar thing. We never noticed how many van/RV travelers there were on the roads until we became one. Although we expect to see a lot less people once we head west.”

O: What have you learned about yourself in the process (so far)?

“How little space and belongings we actually need to live comfortably and happily. Going from living in a three-bedroom house full of stuff, to a van, was so much easier than we thought, and very freeing. Less to weigh you down it seems! Now when we picture living somewhere permanently in the future, we imagine a tiny-house-size space on a bit of land. The big sprawling house is no longer our dream.” 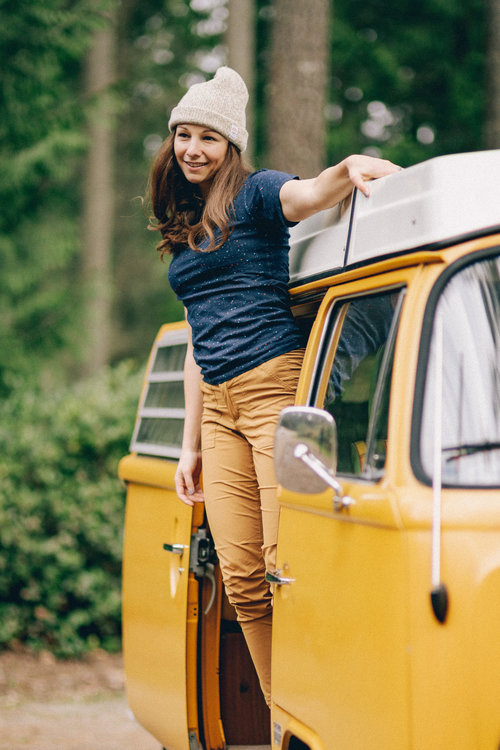 Photographer and writer fueled by creativity, community, coffee and the great outdoors.
Follow her travels and musings at Forever Stoked. lesliecarvitto.com/foreverstoked
Previous Post « 6 Australian National Parks You Need To Know About
Next Post How To: Create a GIF for Your Outdoorsy Listing »