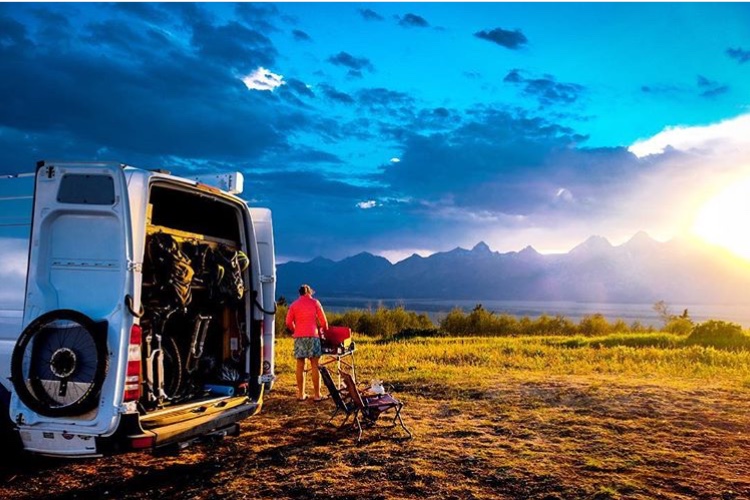 The National Outdoor Leadership School is home to more than 600 field instructors—a group of well-trained people who are proud to live minimally, work seasonally, and maintain loose ties to “normalcy.”

Most NOLS instructors spend long stretches of time living totally off the grid, leading expedition-style trips in the wilderness. Since the North American summer time is peak season for these instructors, the rest of their year is often spent pursuing personal trips, holding down jobs that allow for summer freedom, or some combination of the two.

These field instructors are a thoughtful bunch, doing their best to live the leadership values they teach on 30-day expeditions—whether they focus on backpacking, rock climbing or sea kayaking, just to name a few of the various course types offered. NOLS-ies are a mixed bag—both young and old, coming from a variety of life’s paths—but it’s safe to say they share a common, rare quality that’s hard to put your finger on.

They are quick to help and slow to blame. They are problem solvers who are upbeat, intelligent, and conscientious. Expressions of gratitude and awareness of others’ efforts are foundational to the culture of the school. As a result, it’s a community that says “Thank you” a lot.

So really, it’s no surprise that Dave Walsh found his way into this considerate, independent and fun-loving bunch.

Walsh is quintessentially what you’d expect of an outdoor guide. He is tall, solidly built, has kind eyes and reaches out to people with ease. His brown curls and killer smile are just an added bonus to his persona. He’s a self-described goofball.

Walsh found his way to NOLS after completing his service in the Marine Corps. He had educational benefits he could use toward a NOLS course, so it seemed like a no-brainer. On his course, Walsh says, he was challenged to recognize his impact on the group even when he wasn’t in a leadership role.

“It was powerful to recognize just how influential someone’s posture is, the energy they’re putting out without saying a word, how that can sway a group pretty significantly,” he recalls. “A negative presence can really suck the group down. A positive presence lifts the group up. That really changed the way I saw my role in the group.”

Making the leap from student to trip leader and moving into the guide lifestyle, Walsh rented his house in Boulder, beefed up his climbing skills with lots of time in El Dorado Canyon and Cochise Stronghold, and headed off to sea kayak in Baja. (It’s a tough job, but somebody’s got to do it.)

He describes work as an instructor with a sense of awe and admiration.

“The camaraderie on a course is hard to beat,” Walsh says. “You start off with a dozen strangers and after a few weeks exploring the outdoors, getting lost, laughing, losing sleep, sharing meals, it all just crafts a group so extraordinarily.”

As an instructor, his role is to allow that to happen, to help the group see when a negative dynamic is at play or when communication is starting to break down.

“The shared experience of a one-month course is like knowing someone for a year in real life,” he explains, “though, in all reality, it’s probably more like five years.”

Walsh had a career prior to joining NOLS. In addition to leading mountain biking trips around Boulder and teaching climbing at a local gym, he also had his own IT business. His goal was to find a balance between NOLS work and the rest of life—maximizing flexibility while still retaining some responsibilities.

He was able to shift his IT career to contracts that allowed him to work from wherever he may be. The short term contracts allowed him to head into the mountains or oceans when a NOLS contract came his way. With that kind of mobility, a home on wheels just made good sense.

In the NOLS community, living in a car for the summer is pretty normal, but few people permanently move into their vehicle. But Walsh wanted to maximize access to the outdoors, and having a home base felt limiting. He inherited carpentry skills from his dad, so building out a van seemed like the obvious solution. In between summer NOLS courses, he found a used Sprinter Van, named it Betty White, and set about making it livable.

His first course of action was to make himself a bed. Shortly after, he built a sliding drawer to hold his mountain bike and tubs of climbing gear. The rest of the van came together piece by piece as he made stops, visiting friends and borrowing tools and an electrical outlet. A kitchen counter, wood paneling, solar panels, a grey water container, and a sun shade were all new additions. Soon enough, Betty White became a comfortable home.

Walsh describes crisscrossing the country for NOLS work as a natural way to test out what it would be like to live in each place. In a lot of ways, he was looking for the next place to settle down, and his home on wheels was an exploratory tool.

“After just two weeks of living in the van, when I shut the door at night, no matter where I was parked, I was home,” he says. “I felt comfortable anywhere.”

He felt free. He knew exactly what his expenses would be each month and could line up work to ensure that the bills were covered. The rest of the time he spent with his adventure partner seeking new trails, new locales, and new ways to simplify life.

“Living out of a backpack is a great way to see how little you actually need, and I wanted to continue that lifestyle with the van,” Walsh says.  “Living with less really fills your life up more, and I really try to live by that.”

Finding balance in the NOLS lifestyle often leads to a pull toward more consistency. Walsh has found success helping others find the kind of freedom he built for himself. The blueprint for his company Vanlife Customs started when he decided to settle back into Boulder and make the city his home base. He put Betty White up for sale, renting it on Outdoorsy until the right buyer came along.

“It was a great experience and I made a lot more money renting the van than I thought I could,” Walsh says. “More than that I got a lot of feedback from people who were stoked that it was a home-built van.”

Soon he started getting requests to build out vans for friends, and word spread.

That was two years ago. Now, business for Vanlife Customs is rolling in strong, and he and his team of fellow builders are busy at work turning vans into homes for others looking to maximize freedom and minimize their belongings.

“We’re busy and we work hard,” Walsh says of his team. “It’s nice not being broke all the time.”

Although operating the business means less time in the field for NOLS, Walsh says he still finds time to tap into his passion for the outdoors by guiding local day trips.