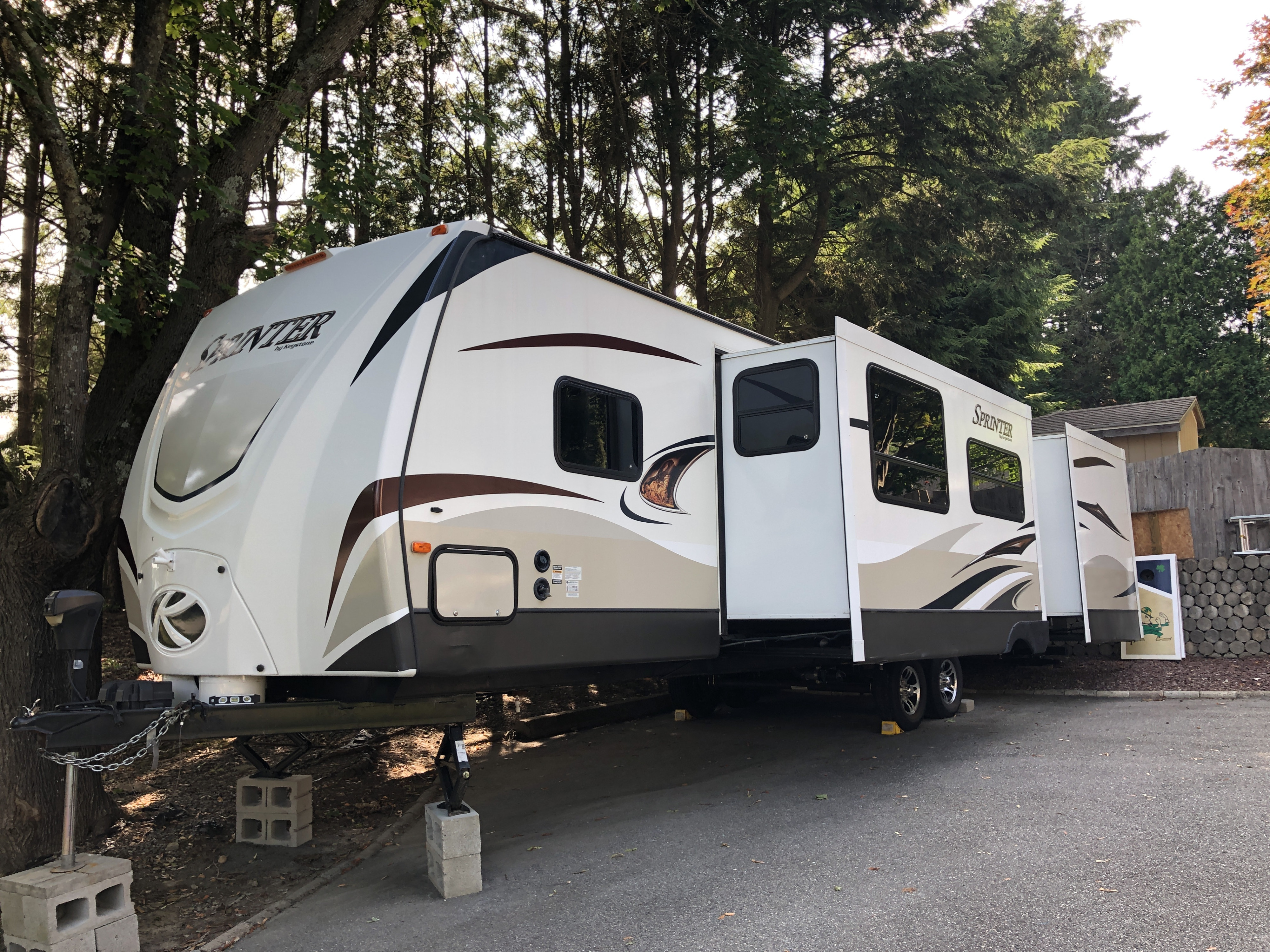 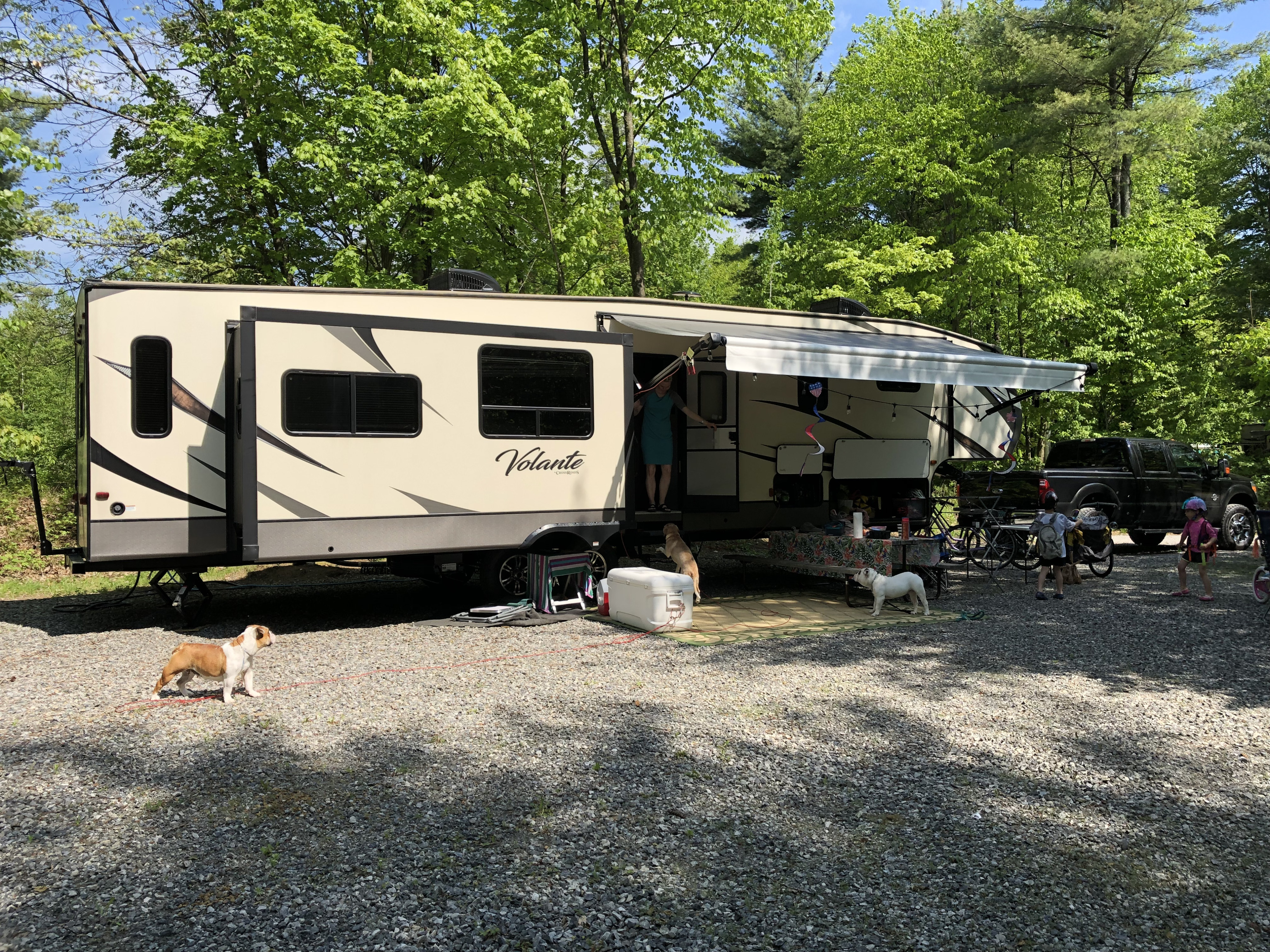 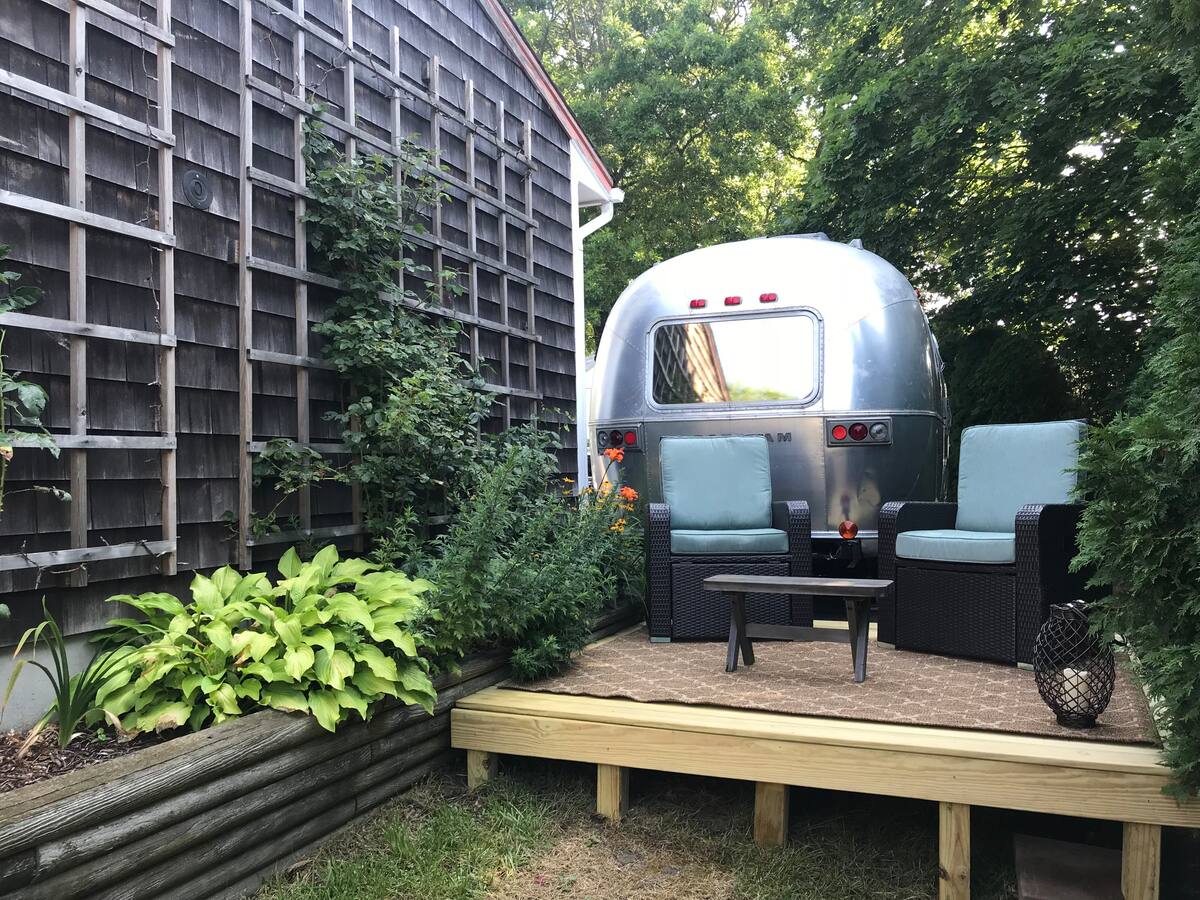 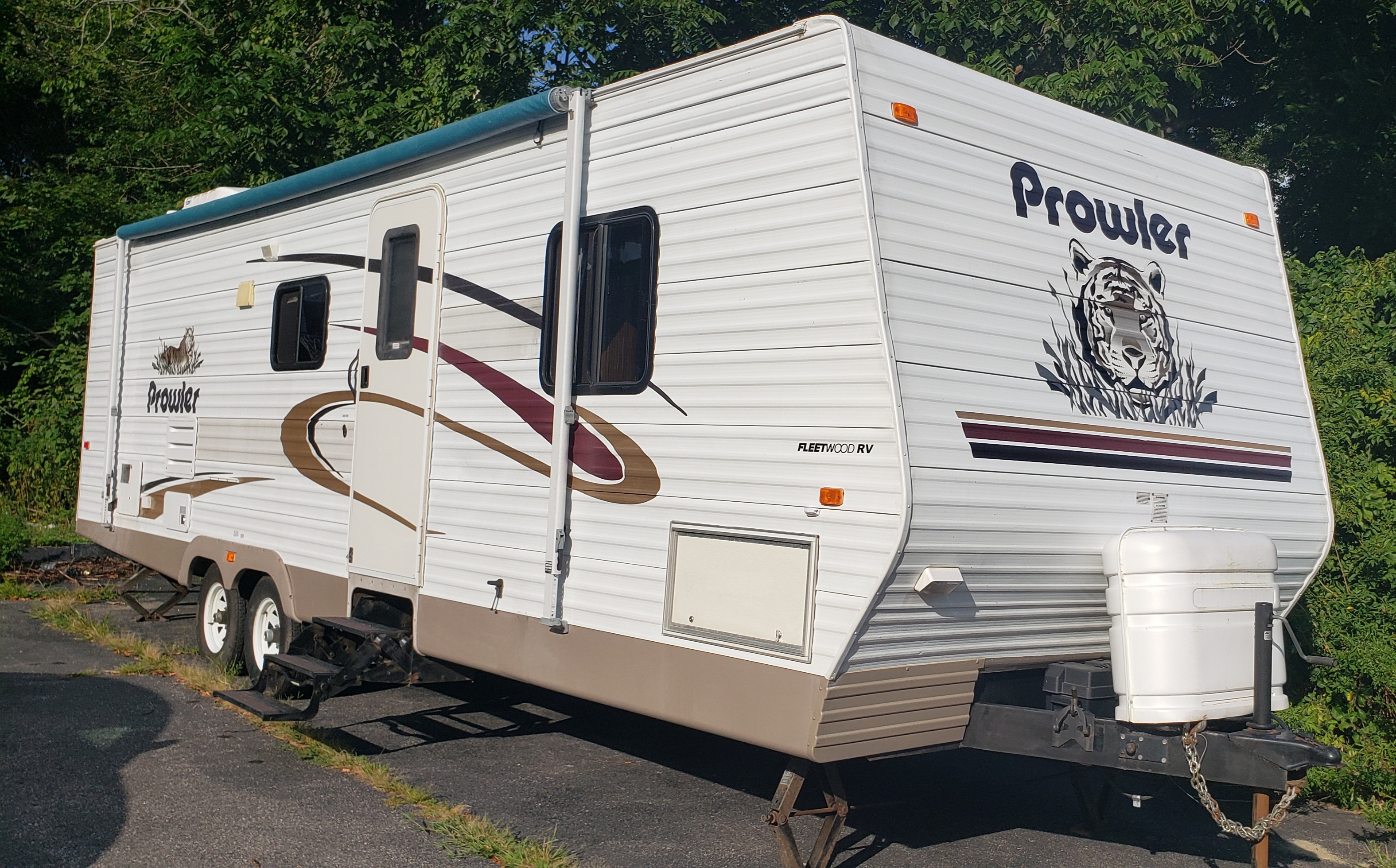 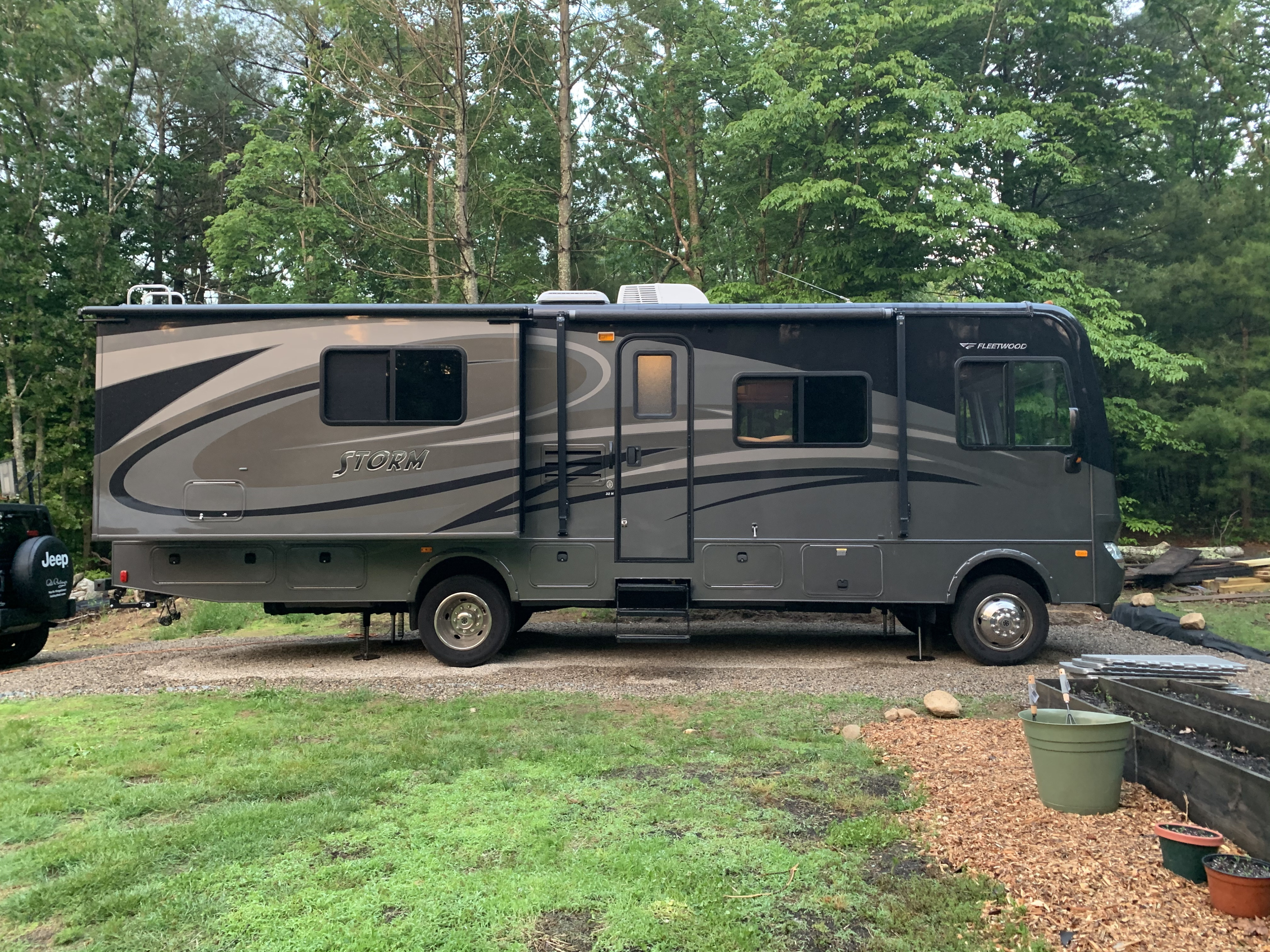 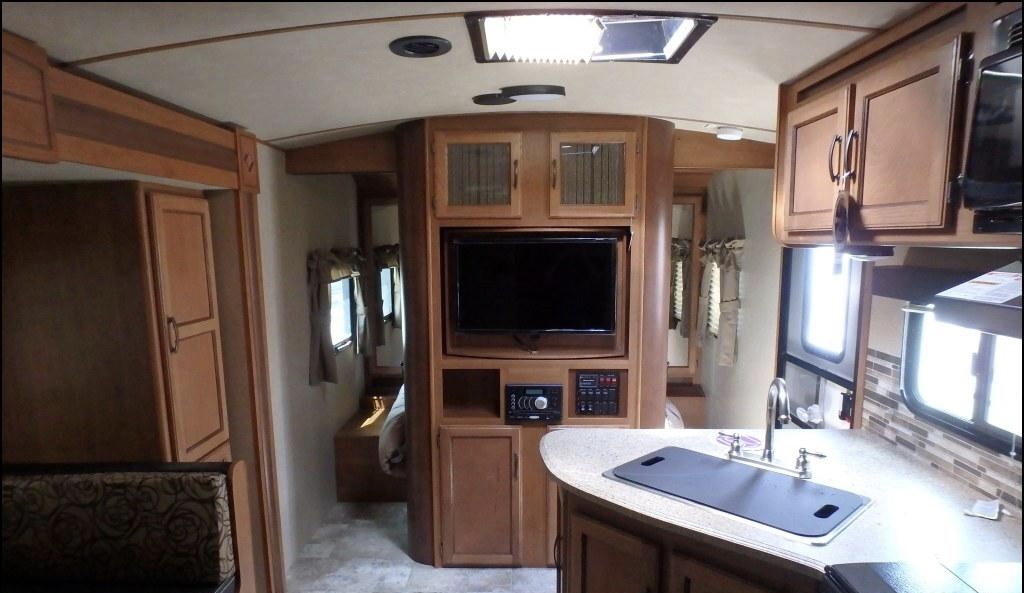 Hopeville Pond State Park sits just off I-345, about a half-hour's drive north of New London and 45 minutes' drive west of Providence, in an area of Connecticut referred to as “Mystic Country.” The state park covers an area of over 500 acres and encompasses the 130-acre Hopeville Pond along with a vast forested region surrounding it.

The park is a popular outdoor recreation site with a pond featuring a beautiful and sandy swimming beach and abundant stocks of catfish, bass, and pike to fish for. It’s also home to the abandoned village of Hopeville, which the park headquarters occupies. Avery House, as it’s known, is one of the last remaining structures in the town and was built in the late 18th century.

Camping with an RV at Hopeville Pond is easy with its plentiful campsites and excellent amenities. Sites have limited hookups, though, with most having none at all and only a subset providing electricity. However, there is centrally-located drinking water, a dishwashing station, pit toilets, and a dump station. There’s also a baseball diamond, lots of great hiking trails, and a fish cleaning station where you can prepare your catch for a tasty dinner.

Hopeville Pond State Park offers enough outdoor recreation to fill an entire RV rental trip, but if you need some other locales to hike, bike, or kayak in, there’s a wealth of great natural areas to enjoy in Mystic Country. The Pachaug State Forest is just a few miles east of Hopeville and has one of the best day hikes in the region - Mount Misery. Don’t be thrown by the less than inviting name, the viewpoint near its summit has impressive views of eastern Connecticut and western Rhode Island.

Want to get out on the water? Finding a kayak or canoe near Hopeville can be a challenge, but there are several rental shops down on the coast or over on Narragansett Bay in Rhode Island. If you’ve got any experience with sea kayaking, you’ll love the innumerable coves and islands to explore around Niantic Bay near New London.

If you’re up for a challenging hike, there’s the 62-mile-long Metacomet Trail that runs up the center of the state. In a state that isn’t well known for hiking, this trail is exceptionally rugged and easily accessible from several nearby communities. It also connects up with two other trails to stretch to the New Hampshire border, coming together to form the New England Trail.

Those hoping for a scenic drive while renting an RV need look no further than Connecticut’s Route 146. This beautiful stretch of highway runs between Branford and Guilford near the coast. It’s a great alternative to the sometimes bumper-to-bumper traffic of Route 1 during the summer months, and it gets much closer to the sandy beaches.

Just a couple of miles outside the RV campground are the towns of Jewett City and Griswold, both of which have an excellent selection of restaurants, stores, and attractions to make use of when you choose a campsite at Hopeville Pond Campground. Most of the area businesses are found in a small triangle of land near where Ashland Pond and the Quinebaug River meet. The majority of the restaurants serve upscale diner cuisine or pizza, with a couple of Italian and Chinese joints thrown in for variety. If you want to cook your own food during the RV camping trip, there are a few supermarkets near the I-395 off-ramp and some convenience stores in downtown Jewett City. If you want to catch a flick with the family during your Hopeville Pond camping adventure, there’s also a theater just south of the interstate.

For anything beyond dinner and a movie, you’ll have to venture a bit farther, most likely down to Norwich. That’s where you’ll find the Slater Memorial Museum, a branch of the Norwich Free Academy, that houses an impressive collection of classical artwork from the Americas, Europe, and Africa. It’s a collection befitting a major metropolitan museum, so this is an attraction that’s not to be missed.

However, the most famous attraction in the Norwich area is the Mohegan Sun Casino, one of the largest gaming establishments in New England. You need not be a gambler to enjoy it either, the casino’s arena draws in some of the biggest names in music, stand-up comedy, and theater. Check their schedule to see what’s happening during your trip.

Another option is the Haul of Fame Trucking Museum in Canterbury, about 15 minutes' drive north of Jewett City. It’s the perfect roadside attraction - a museum dedicated to big rig trucks, the loud noises they make, and the kinds of cargo they carry. The museum is full of old and sometimes quite rare heavy equipment dating back to the turn of the century.