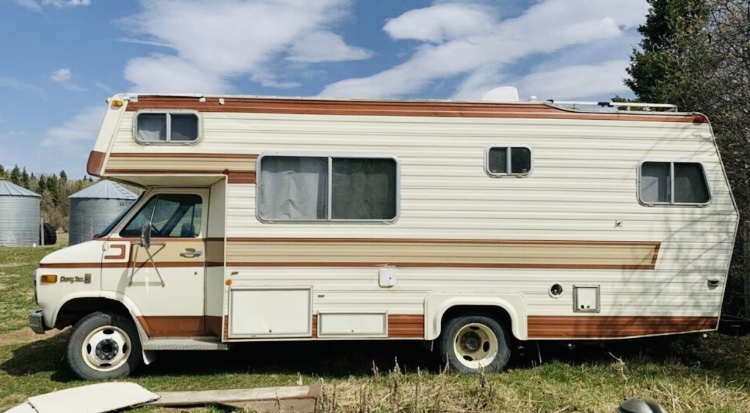 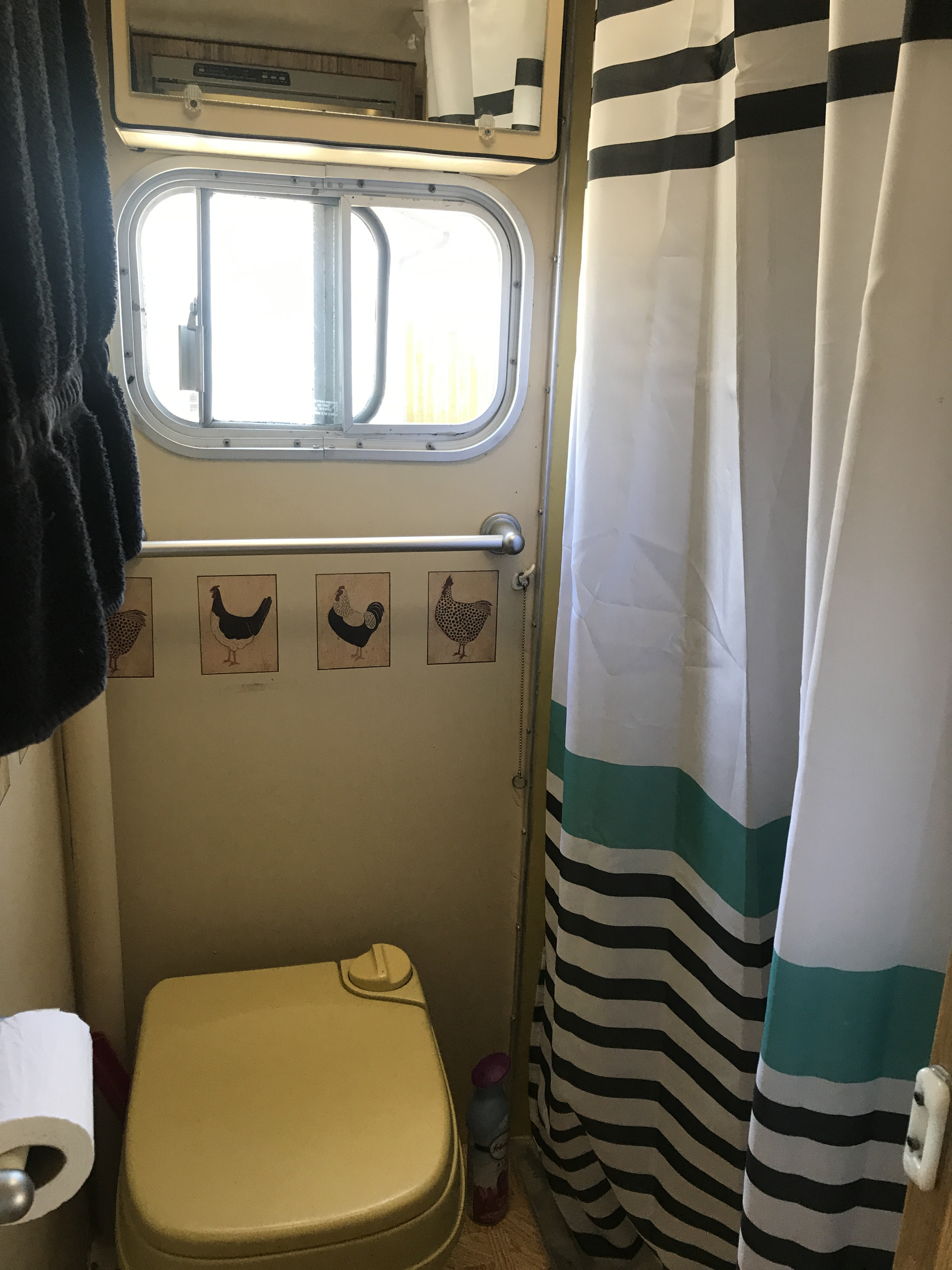 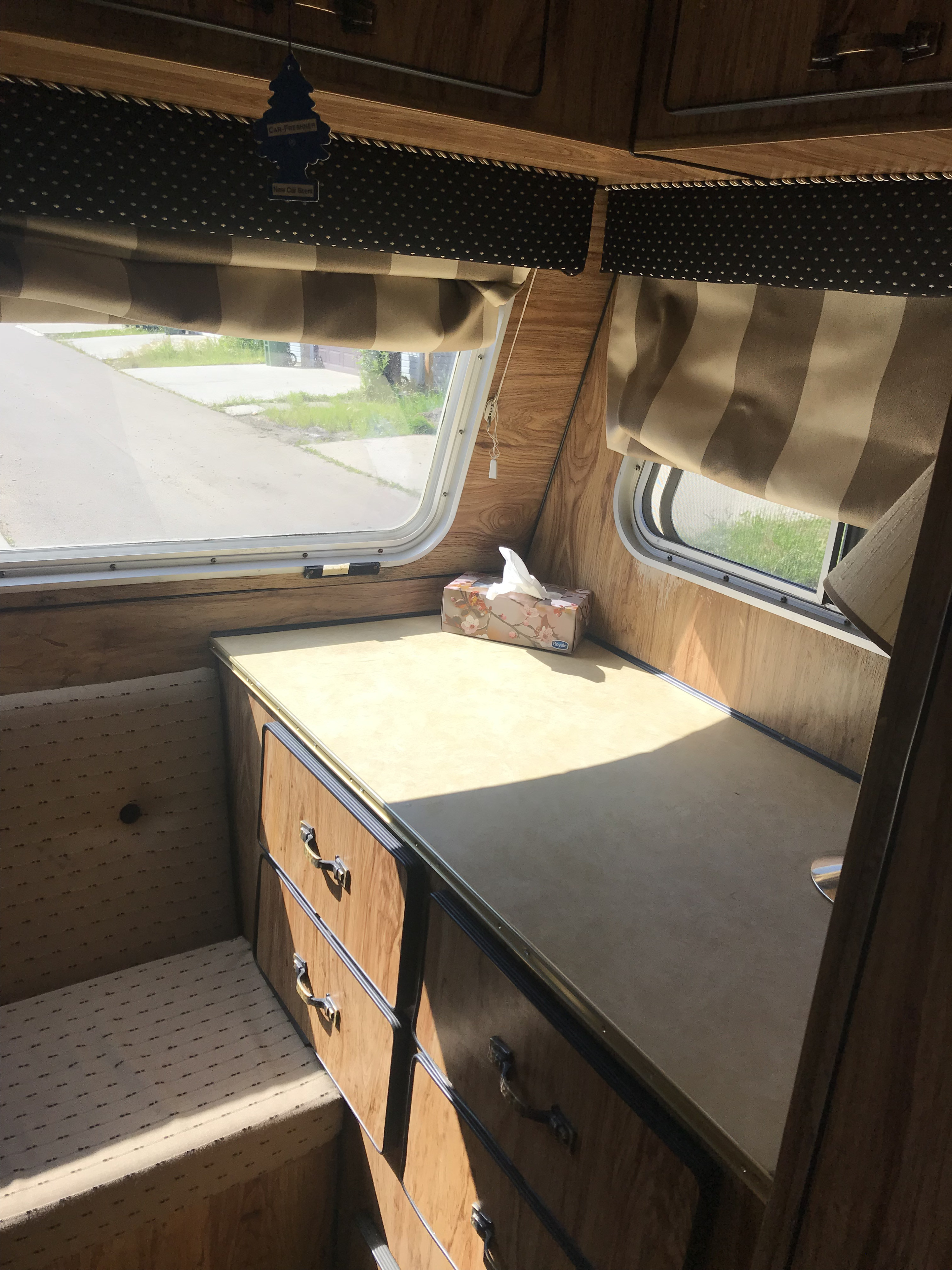 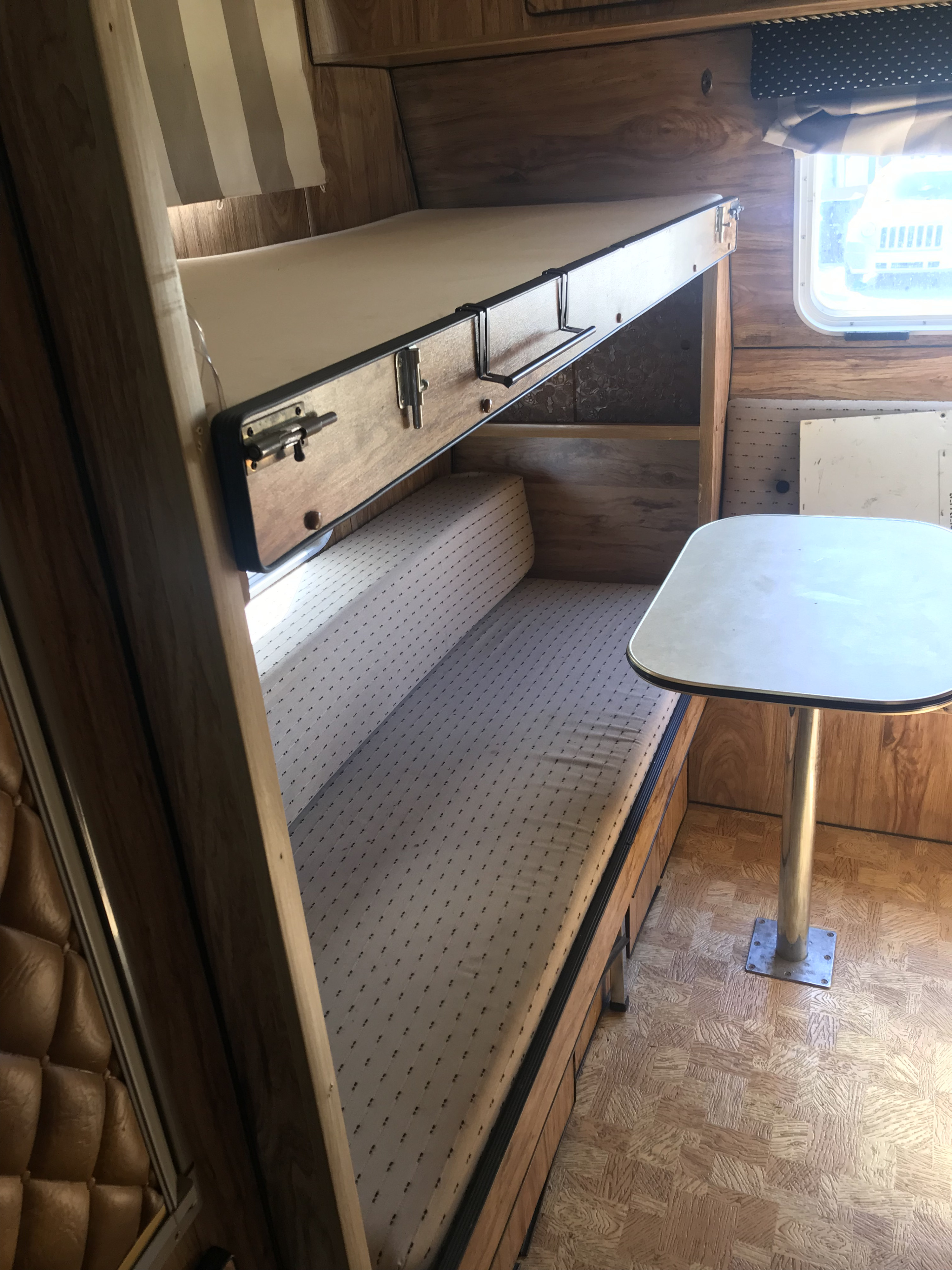 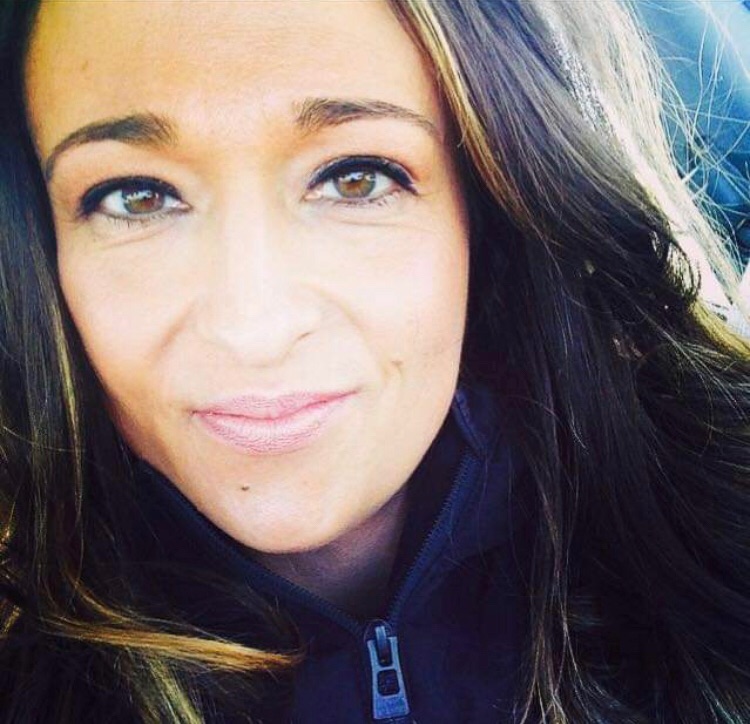 Typically responds in less than an hour

Learn about how this vehicle is cleaned
Class CRental #177358

Create your own beautiful memories in our vintage motorhome. Whether you want to escape reality for a few days, or a week or two, this RV has everything that you’ll need. Sleeps 6, one bunk above the drivers seat, bunk beds in the back, and the kitchen table folds down. Everything works as it should. If you have pets, we will allow you to bring them with you. Just please never leave them unattended in the RV as they want to be where their family is too.

Rent the generator for your trip for $50.

I’m sure I’ve forgotten a few things, but we are new at this, so please feel free to message me with your questions and concerns.

Cancellation policy flexible
Mileage
Free unlimited use
Generator usage: 12 free generator hours per day
You will be charged $2.34 for every hour over per day.

It doesn't get more convenient than having your own bathroom on the road. Let's talk about the 3 main types of toilets you may encounter in an RV rental.
Content by

I personally would not recommend this motor home to anyone. Had a hard time getting it started up every single time, felt like we were going to get stuck anytime we had to turn it off. The fridge/freezer did not work at all, neither did the heat.

We are sorry to hear this is how you felt. Upon returning the motor home you told my husband that everything went well. As he has mentioned before you took the motorhome, the fridge takes 48 hours to cool down. It was cold when you left, and he reminded you that if it got warm, once you were plugged in, 48 hours later it would Be cold which is standard for Dometic fridges. Upon returning the motorhome you left the fuel gauge between empty and 1/4. You left with a full tank, and it was to be returned the same way. No different then a rental vehicle. The best part was, had you told us that you had broken the toilet paper holder, I would have understood that accidents happen, but instead you left it for me to point out to you. You are a grown man, but I see your dad needed to fight your battles. Next time you rent, keep in touch with the owners. We would have helped you troubleshoot any issues you had while you were on vacation. These were easy fixes! Take care. 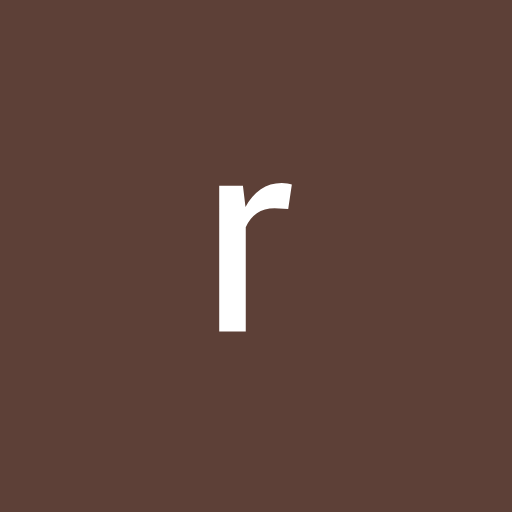 We rented this wonderful motor home last month last minute. When we arrived to collect it, it was all ready to go! Very clean! Very well stocked with utensils, extra towels, heater etc. Andre even gave our kids a bag of marshmallows for the trip. 😀

Although this motor home is old, it has everything you need to enjoy the wilderness. It runs well and is comfortable. Highly recommend! We had a great weekend making memories.

We had a great weekend. The kids loved travelling back in time to 1979.

Had this vehicle booked for 4 nights through Outdoorsy. Loving the idea of having an older RV, we went to pick it up from the owner Andrea. Up to this point everything is going well. Upon inspection of vehicle however we are immediately concerned with the condition of the RV as one of our group is a red seal mechanic. To name a few of the defects:

The passenger side mirror is broken.

The gear selector indicator is broken off so you do not know if you are in park, neutral, reverse, etc.

Only the high beam headlights work.

The speedometer does not work properly so you don't know how fast you are going.

The alternator belt was squealing so badly that kids on the side of the street where covering their ears when we drove it around the block and the belt noise would not go away even after the vehicle warmed up.

We brought the RV back to the home where we picked it up from and asked Andrea to come back outside and politely explained the defects to her. She told us that she had tried to book it into the shop to get the alternator belt tightened but could not get it in before our trip.

We explained that there were too many things wrong with it and we did not feel safe driving it. She insisted that there was nothing wrong with it and after only a few minutes of conversation a man came out from her house and very angrily approached the vehicle. He was very rude and when we tried to explain what was going on he would not even let us talk and started yelling at us saying "No refunds! There is nothing wrong with the vehicle and you better get the F**K out of here before I start swinging". He threatened us several times and while we were moving our equipment back to our vehicle he was yelling things like "You guys are some ugly F***ers. Get the F**k out of here".

We were supposed to leave for our trip the following morning and now had no transportation or accommodation and the entire trip was ruined. We couldn't even work something out with the owner about possibly getting some stuff fixed quickly and postponing the trip as we were in fear for our own safety and did not want to go anywhere near the house.

We went and filed a police report and contacted Outdoorsy and they told us we had to talk to the owner to come up with a resolution on how much money if any we would be refunded. This has been one of the worst experiences of my life and Outdoorsy has been extremely unhelpful with the whole situation.

Let me just say, that the amount of respect you and your friend showed towards a woman was sad. You were looking for something “free” from the moment you got to our house. The first thing your friend said to me when I introduced myself was, “how much do these outdoorsy crooks make off me for this reservation”? My husband came out because he will not stand for me to be disrespected, as I was. The RV might be older, but every other renter has had a great vacation, and the rig ran just fine for them. “If” your friend was a Red Seal mechanic like you and him claim, and if you were so concerned, why didn’t you come and look at the RV ahead of time?

These guys were great to deal with and very helpful. We had a really fun time in the RV. It was comfortable and kept us warm and dry on our trip.

Thanks so much Christien! We are so glad you’re family had a great time in the RV. Anytime you’d like to rent it again, let us know! Great renters!! 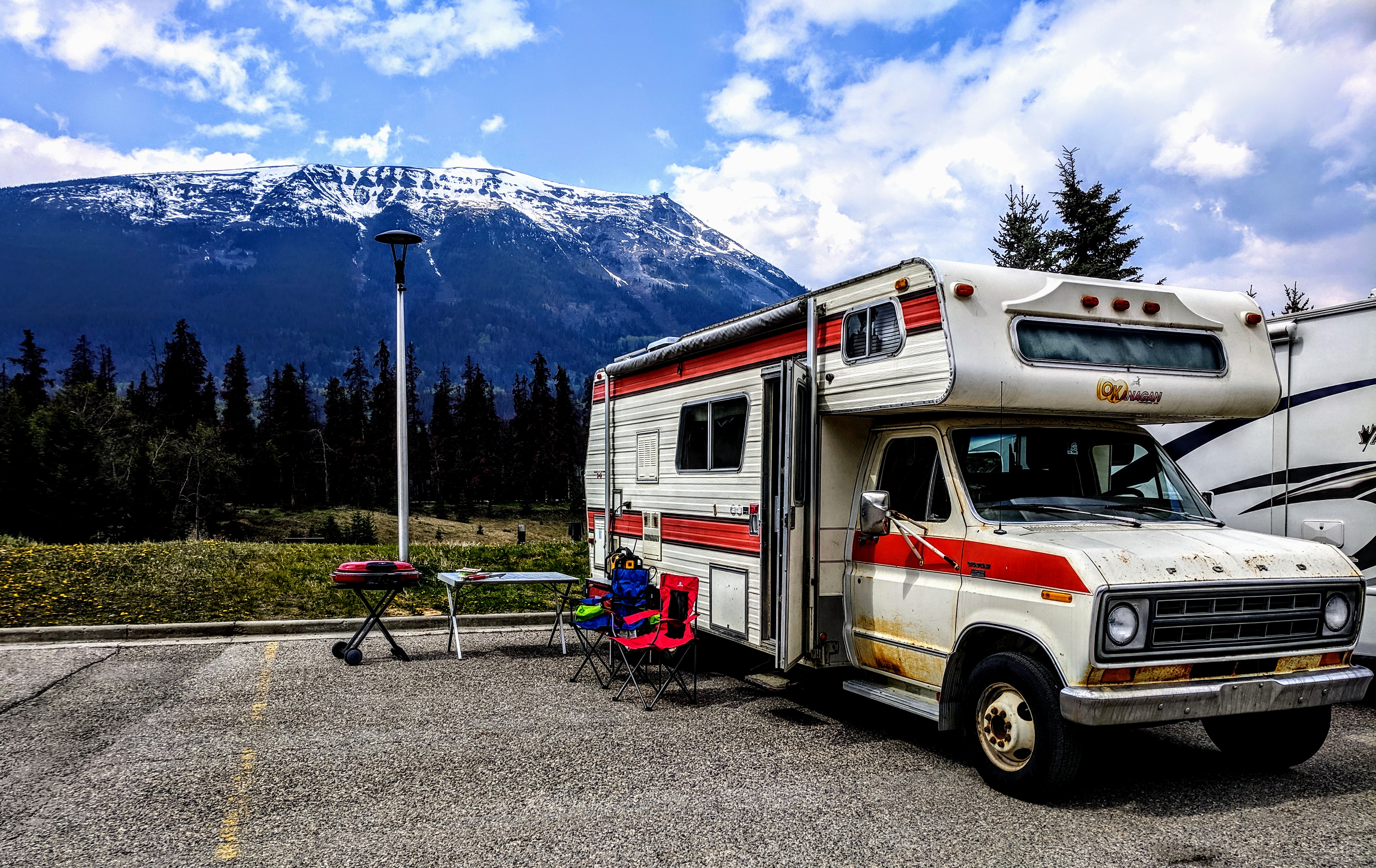