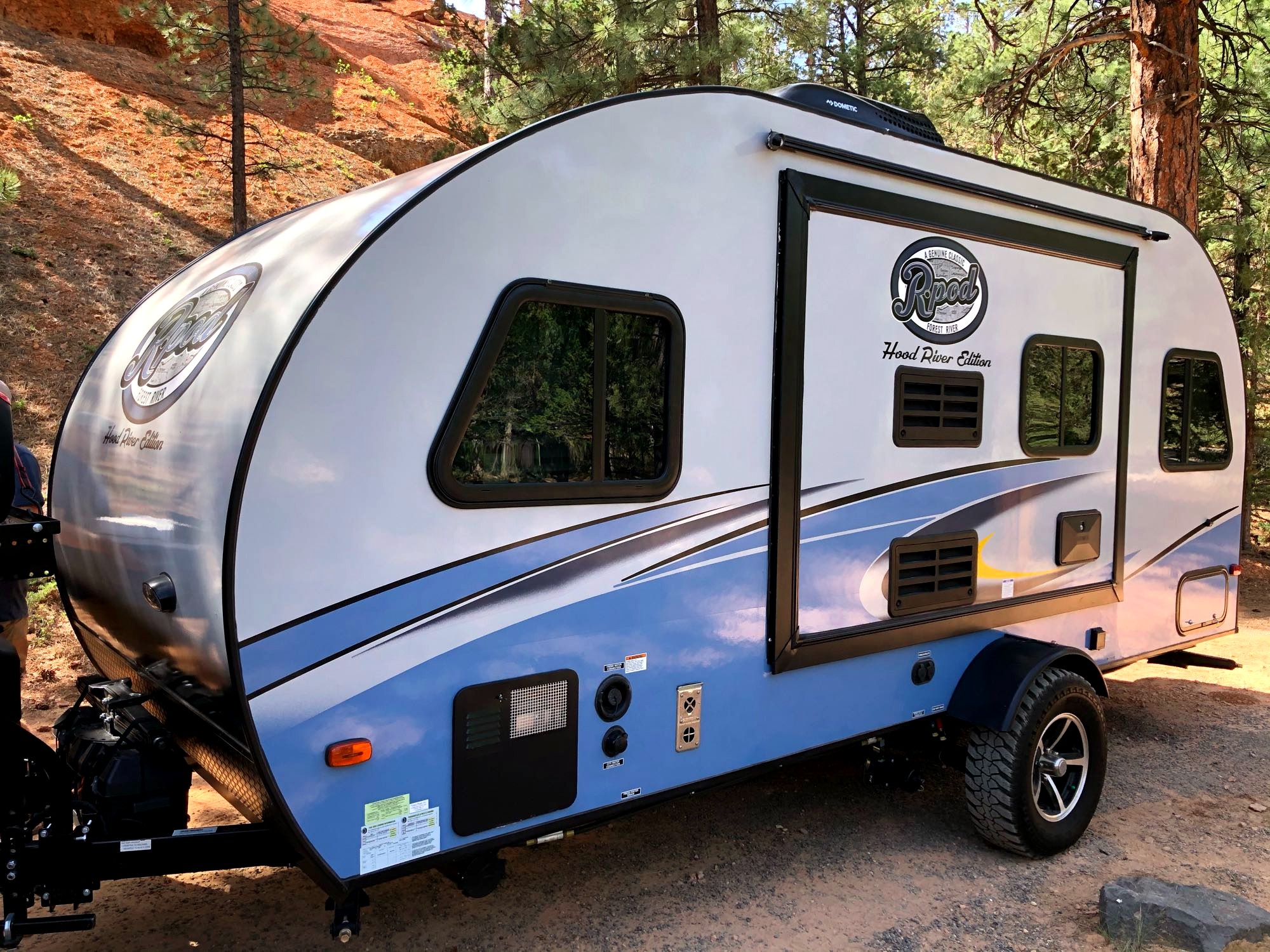 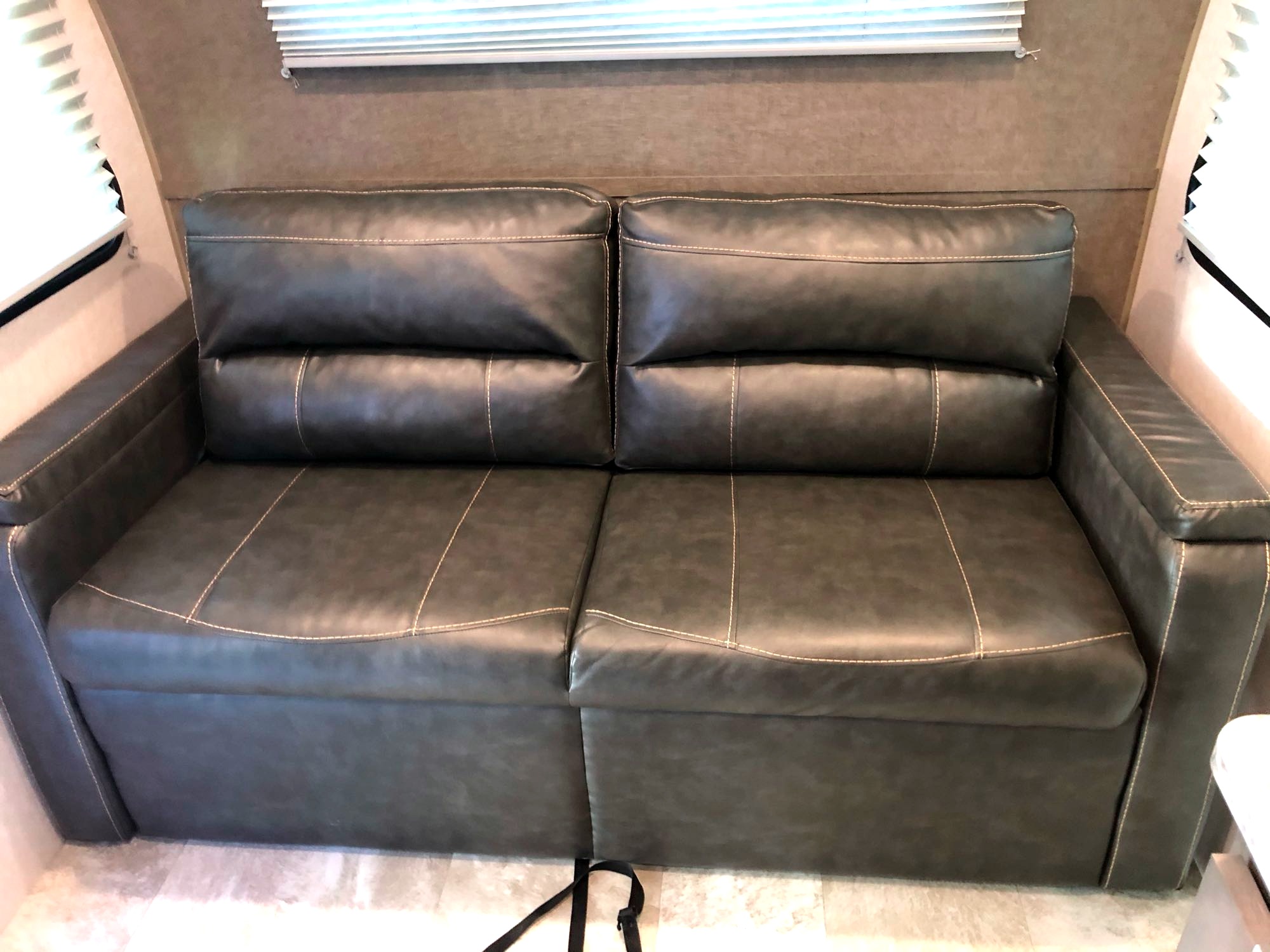 Meet your host, Natasha and Carlos 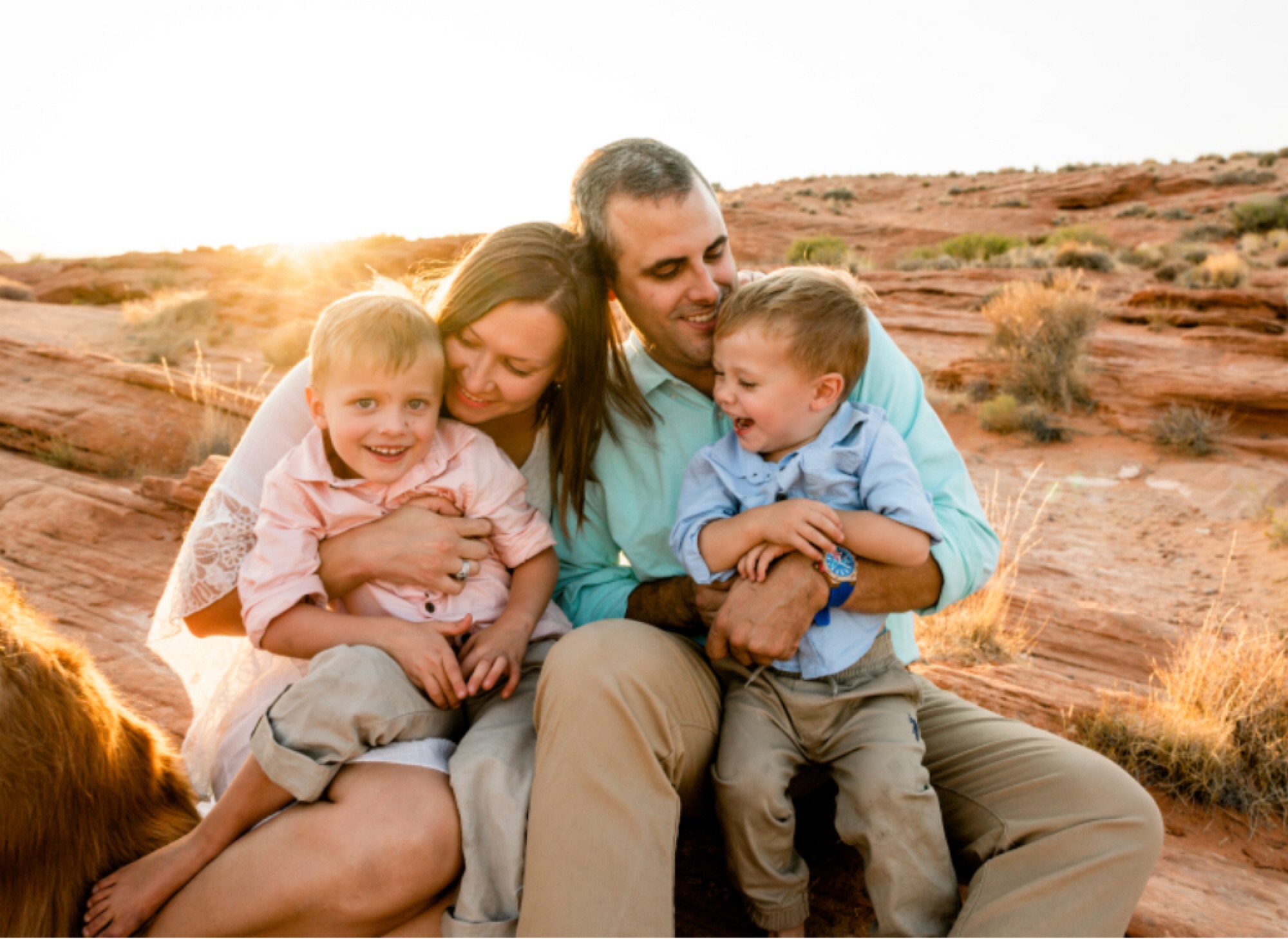 We love to hike and camp with our kids. We try to get out as much as we can to see Utah.

Carlos was very thorough in showing us all the mechanics, and very patient with our questions! Great RV snd a great trip!

Her name is SupaFly! You will get looks while towing, camping or glamping. We live in a beautiful state where road tripping through Utah is a must.

Please note our pricing is $85 per night from November 1-March 1 due to dry camping. You will still be warm but you will not have access to water or toilet. We have booking minimum 6 nights for those days.

Our SupaFly is a mix of luxury, simplicity, and suitability all in one. Coming with 20ft of length this R-pod offers ample space for couples through groups of 4 to fully experience the wonders of Utah.

Luxury: This R-pod is built to impress, especially since it has a fully operating shower! LED Lights, and speaker system that not only extends throughout the R-pod but the sound projects outside.

Pick up/Drop off- Depending on your trailer experience level plan on spending up to an hour on-site to get up to speed on the trailer.

We have a 2KW generator available for rent. The purpose of this generator is to recharge the batteries in the event that battery power drops. When the trailer is not plugged into an electrical campground you will be running systems off of battery power ( furnace fan, lights, power slide, jack ) The generator will be able to recharge those batteries. If you’re going for more than 3 days, we recommend bringing a generator.

Relax and enjoy an outdoor adventure with many of the luxuries of your own home.

Have a question about towing?
Get all the comforts of home in your RV! Outdoorsy community member, Mike Jackson, runs through how to keep a comfortable RV with proper operation of AC and heating.
Content by

Take SupaFly on your adventure! Carlos was very thorough in showing us all the mechanics, and very patient with our questions! Great RV snd a great trip!

Carlos was very thorough and detailed with everything we needed to know for our trip in his trailer. We would happily rent from him again.

Pickup and return were seamless. The camper pulled like a charm, especially with the sway bar hitch provided free of charge. We chose to go dispersed camping (boondocking). The camper was easy to maneuver so we were able to pretty much choose whatever spot we wanted to. A very comfortable interior, heated by an ample furnace, made for warm, cozy, restful nights. I also enjoyed using the bluetooth compatible sound system

Why I cannot recommend this Trailer:

I rented this fairly new RPod Camper Trailer in excellent condition and had a five-star trip with it. Yet, a couple minor things went wrong and at check-in the owner turned combative and threatening. Add a dash of manipulative and unethical behavior and my feelings about the rental turned quite negative. I tend to be low-key and cooperative and I found the owner’s treatment totally unacceptable.

Here is what went wrong: (1) the spare tire cover blew off in the high winds of WY. Tow at 65 with cross winds at 45 mph and such things happen. I can afford to pay for the $20 cover, which by the way had no keeper straps, just elastic! So, when I disclosed that, why the flashes of anger? Unnecessary.

(2) I was late an hour due to the interstate being completely CLOSED by a major accident. The late fee, at a sum equal to TWO-DAYS additional daily rental rate for a one-hour delay, was eventually forgiven, but only after various threatening, hostile, and unpleasant language from the owner. Unnecessarily heavy handed.

(3) I was told that I did not dump correctly, and was later sent a video of a half-gallon of water being drained into a bucket, which cost me $200. I am a newbie, so something could have gone wrong. However, the claim of a “half full” tank is not consistent with a video clip of unknown origin showing a half-gallon being drained. Where is the half-a tank? That would be 15 gallons! The evidence was NOT consistent with the story. Furthermore, my requests for further information so that I could learn from what went wrong (if it did) were ignored. The customer is not the owner’s enemy, so why not explain and help them learn? So many unanswered questions left me doubting the accuracy of the stated tank conditions.

In discussing the dump, the owner’s recollection of verbal instructions jumped from “flush for 5” to “flush for 10 minutes”; and the additional “put out the slide in order to check the meters”. I checked with my RV friends and was told NOBODY puts the slide out at the dump stations. Furthermore, that would not be stable without the stabilizer jacks. So, his “revised” instructions were not consistent with his own safety instructions regarding stabilizing the slide, or mainstream practices among fellow RVers. This shifting and inconsistent story left me feeling I was being manipulated.

Things I found disappointing in this rental:

(1) Where is the table? Your floorplan clearly shows a table and I looked everywhere for the folding table, which I wanted for my breakfast. Not a disaster, but the owner needs to disclose more clearly that there is no table when the picture shows one and an obscure click-through footnote takes it away.

(2) Kitchen basics – the owner chooses not to provide a single, spoon, fork, can opener, fry pan, aluminum foil, plastic wrap, food container, dish towel, rug, or even matches for the stove! This is his right in these times of a virus. However, this is not clearly communicated until you arrive for pickup. Causing extra shopping errands before you can enjoy the RV. Know before you go! The wife did help me out by lending out 2 plates and one single cup, which helped.

Things I found unethical in this rental experience: At return check-in the owner and I did a detailed walk through and found no damage whatsoever. However, he presented a “blank damage report” and insisted I sign it, which he would “fill in later”. I found this arrogant, pushy, and unethical. There are avenues for seeking damages through Outdoorsy, but the owner was intent on getting a “blank check” report with my signature. I greatly resented this unfair treatment. Furthermore, he did not present me with any copies of those reports as any normal contract agreement requires. It seems the owner was playing “gottcha” games, with facts to be filled in later above my signature!

I am left with 50% probability I got scammed on the add-on fees, and 50% probability the owner is just a very combative person lacking any sense of customer service. Either way I cannot recommend renting this trailer. I am hoping to do 4-5 more Outdoorsy rentals in the next year before buying my own rig – but it won’t be from this owner!

Bottom line: If you do rent this RV (1) use your phone to take a video of the RV at check-in to be sure you can prove the RV’s condition, (2) rebuff the demand to sign blank-check return forms and be sure to get copies with his signature, and (3) bring a drain bucket in case a half-gallon of flush water is “magically” turned into 15 gallons of waste (costing you $200)! You have been warned!

Hello Roy, first of all, we’re deeply regretful that you didn’t have an ideal experience. For that, we’re very sorry. Please let me clear up a few of the points you made here.

You were two hours late returning our R-POD, not one. Sometimes accidents happen, we’re always accommodating to our clients if they give us notice, we did decide to not charge you for this.

Outdoorsy owners have 48 hours to fully inspect any damage, this was on the two contracts everyone signs. In your case, there was no damage, but you did neglect to empty the black water tank. As I mention to all renters, you must empty the black water tank, until it is emptied. The best way to confirm that it is emptied is to check. Additionally, the contract you signed recommends that you spend at least 10 minutes walking around the r-pod inspecting it for damages, everyone is encouraged to take photos and videos.

When you picked up our R-POD you had mentioned you’ve done this several times before, regardless most of our clients are newbies. Which is why we spend an hour walking every client through every process. We also provide documentation for you to download if you have questions. As with all of our clients, if you ever have questions we are available 24/7 for help.

Again, we’re so sorry we didn’t do our best here. We would be happy to rent to you again in the future, and if there is anything we can do to accommodate you, we would love that.

Natasha and Carlos were fantastic! Timely responses and thorough. They made sure we had everything we needed and made the process simple. It was a great weekend up at Flaming Gorge! Thank you Natasha and Carlos, it was a pleasure to work with you! 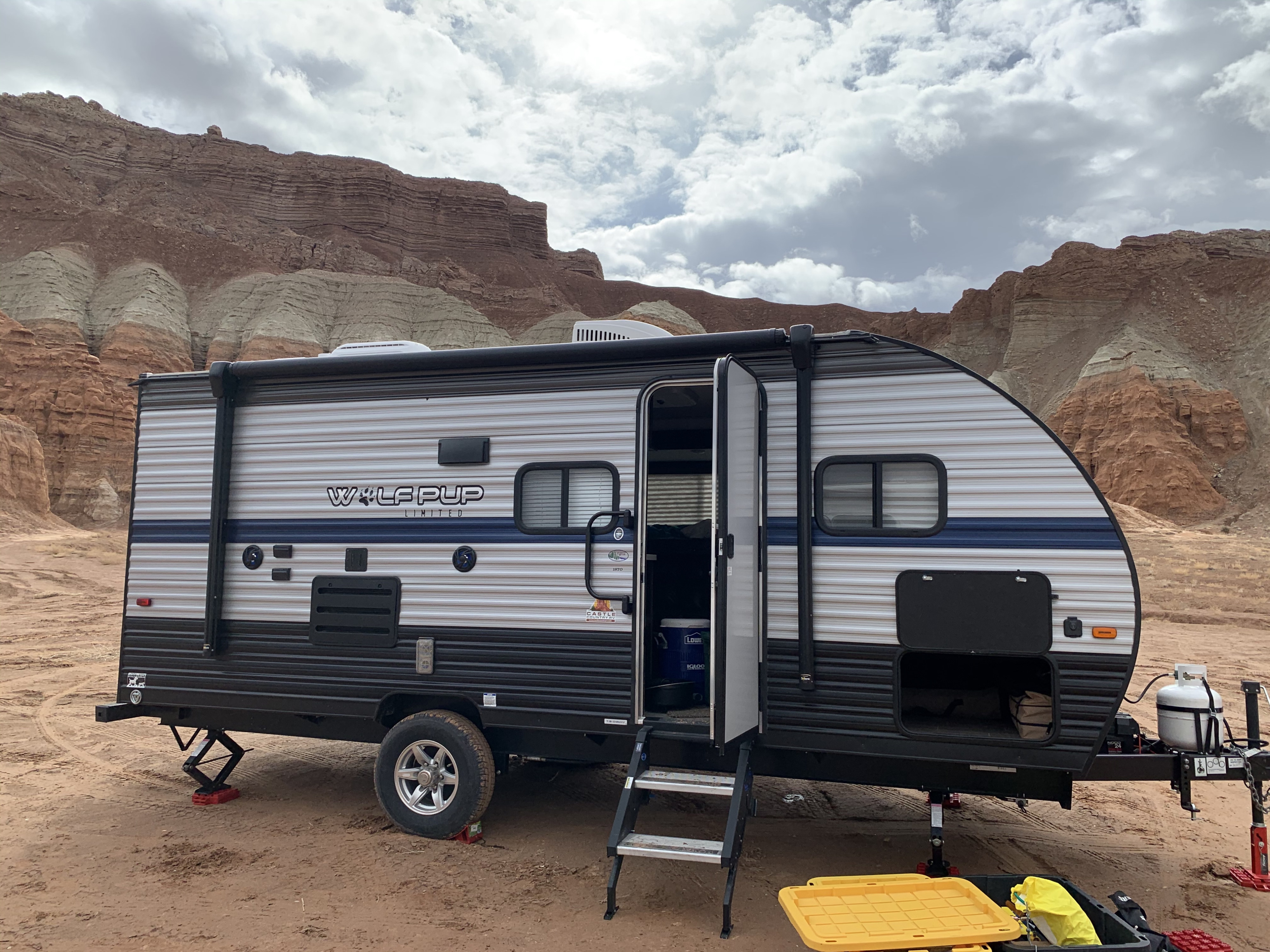 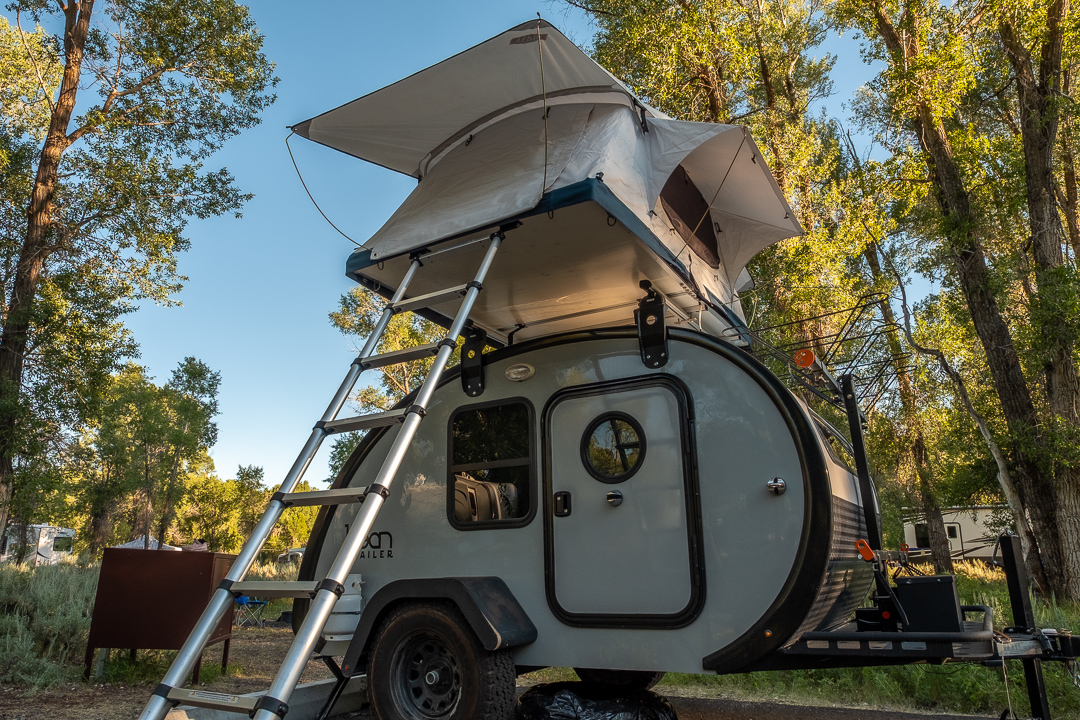 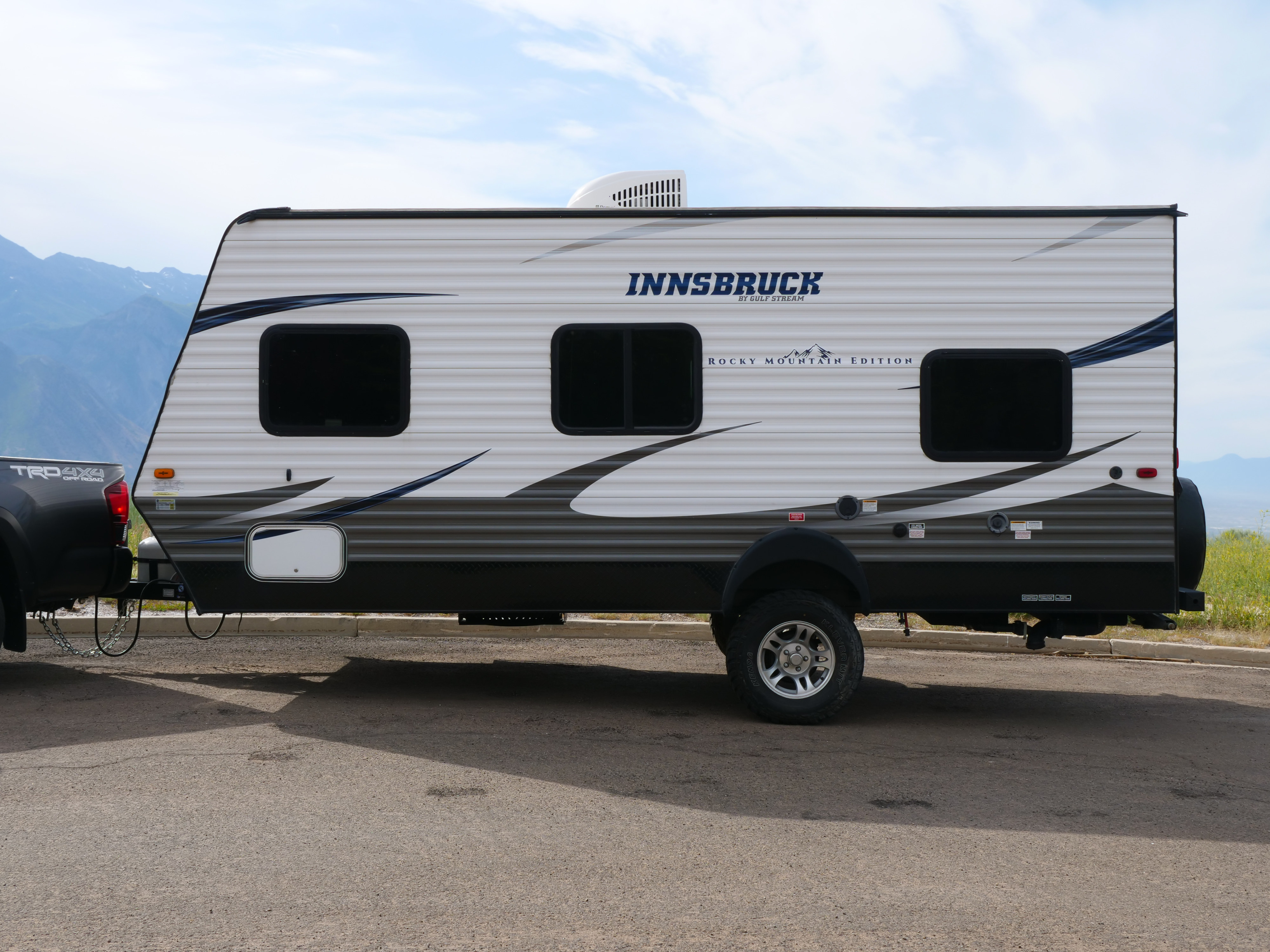