Take a weekend drive and camp in your RV on a road trip from Mexico, Indiana to Eau Claire, Wisconsin. This 452-mile trip has plenty of camping, wilderness areas, and interesting sights to see. Take Highway 31 north to Exit 225B, then Route 30 west and 49 north to Interstate 90. Take Interstate 90 through Chicago onto Interstate 94 to exit 70, and Highway 53 to Eau Claire.

While staying in the Mexico, Indiana region, camp southeast of town at Indian Trails Campground, Hidden Creek Campground, or the Miami State Recreation Area which has a beautiful lake.

Mexico, Indiana was established in 1834 and is one of the oldest communities in Miami County. It is a small town surrounded by lovely countryside and the larger town of Peru, Indiana is just a few miles south. While camping in the Mexico region, visit Peru and check out the Grissom Air Museum where you can view historic aircraft or the International Circus Hall of Fame which features exhibits and displays from the colorful circus world. Also in Peru is the Miami County Museum with artifacts representing local history, or you can sample the wares at a local small winery, or watch an exciting auto racing at the local drag strip or speedway.

RV Rentals in Mexico, IN

Shipwreck of the Silver Spray

As you travel towards Chicago, Illinois, on Interstate 90, stop on the shores of Lake Michigan, south of the city, to view the historic Shipwreck of the Silver Spray. Part of the ship can be seen jutting out of the water from the 49th Street Beach and Lakeside Trail just east of the Interstate.

The rusted remains of a sunken steamboat are situated within view of the shore. Most of the wooden structure has deteriorated. However, the ship's metal boiler still points out of the water. The ship sank in 1914, over a century ago, when it hit the Morgan shoals, a massive underwater rock formation, off the Lake Michigan coast. This is the closest shipwreck to the coast of Chicago, and a popular diving spot. You can even swim out to investigate, and some people sunbathe on the structure that juts out of the water at an angle, but use caution. Only experienced swimmers should venture out to the wreck.

You can view the wreck as you stroll along the lakeside trail, or sunbathe, swim, and wade at the local beach. This is an interesting place to stop and enjoy a picnic on the Lake Michigan shore. RV parking can be found in the recreational areas nearby.

After you pass through the metropolis and urban areas of Chicago, you will reach northern Illinois countryside and wilderness areas. Stop at Rock Cut State Park just west of Interstate 90 for recreation and camping opportunities. This park occupies 3000 acres of beautiful natural area, with rolling hills, wildflower meadows, and the 50 acre Olsen Lake.

On a hot summer day, you can cool down with a dip in the lake which also offers great fishing. In the winter you can enjoy ice skating, ice fishing, snowshoeing, and cross country skiing! RV campers will find 210 campsites that accommodate RVs up to 40 feet in length with electrical hookups. Amenities at the campground include flush toilets, hot showers, a water hydrant on each campground loop, and a nearby RV dump site. There is also a boat ramp and playground at the campground. The campground is open all year; however, water supplies and the dump station may not be in operation between November and April. Reservations can be made online. The park is easy to get to from the Interstate and has RV accessible roads.

As you approach your destination, on the last leg of your journey, you will find an excellent campground just south of Interstate 94 in the Black River State Forest at the Castle Mound Campground. There are several campgrounds in the park. However, Castle Mound is the closest to your route and features 35 campsites, 14 of which have electrical hookups. You will require reservations during the peak season from May to October; the remainder of the year sites are available on a first-come, first-serve basis.

Amenities include a dump station, restroom and shower house, vault toilets, a small camp store where you can purchase firewood, and a sheltered picnic area. The Black River State Forest consists of rugged wilderness terrain with plenty of hiking and mountain biking on the challenging terrain which are popular activities in the park. You can also enjoy swimming, fishing, and boating on Lake Arbutus in the north part of the park, from the East Fork Campground. During the winter, snowmobile and cross country ski trails provide recreational fun. 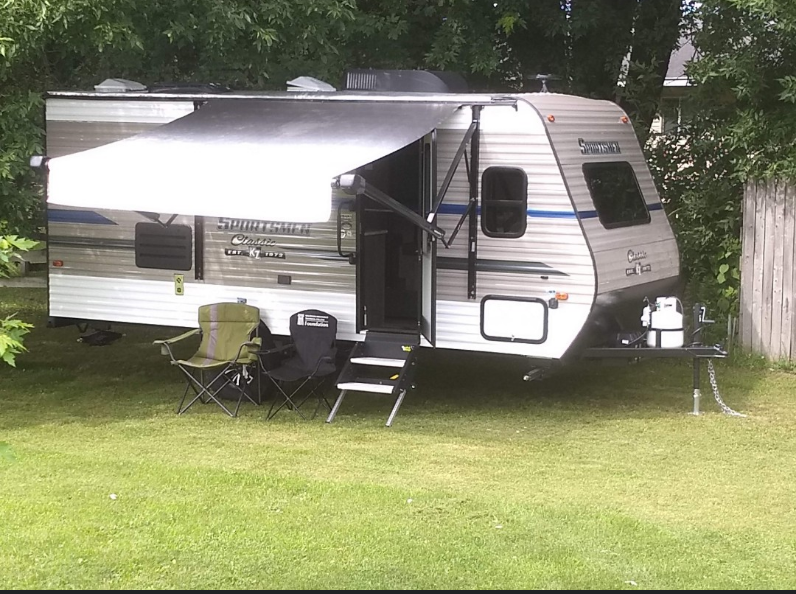 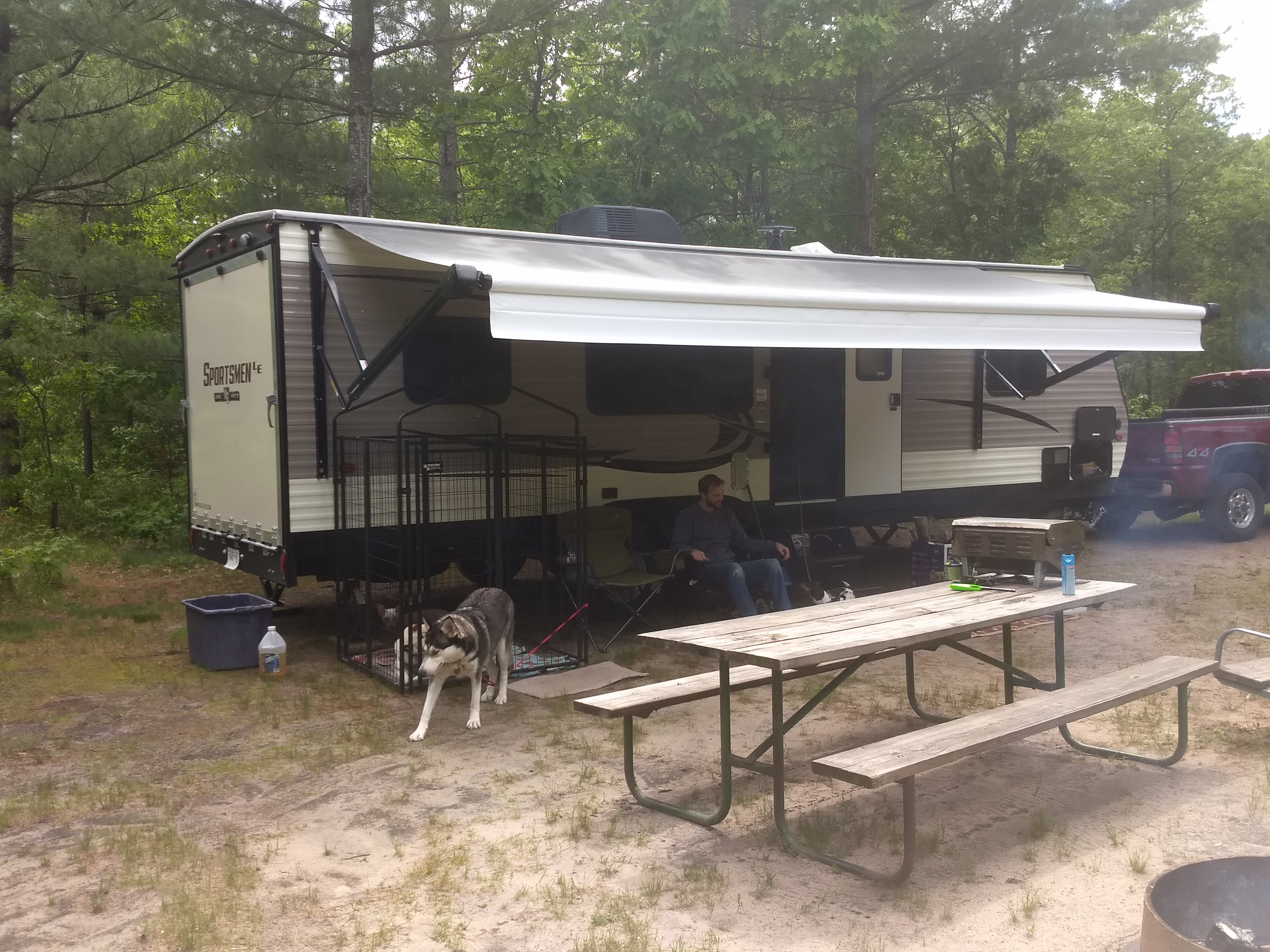 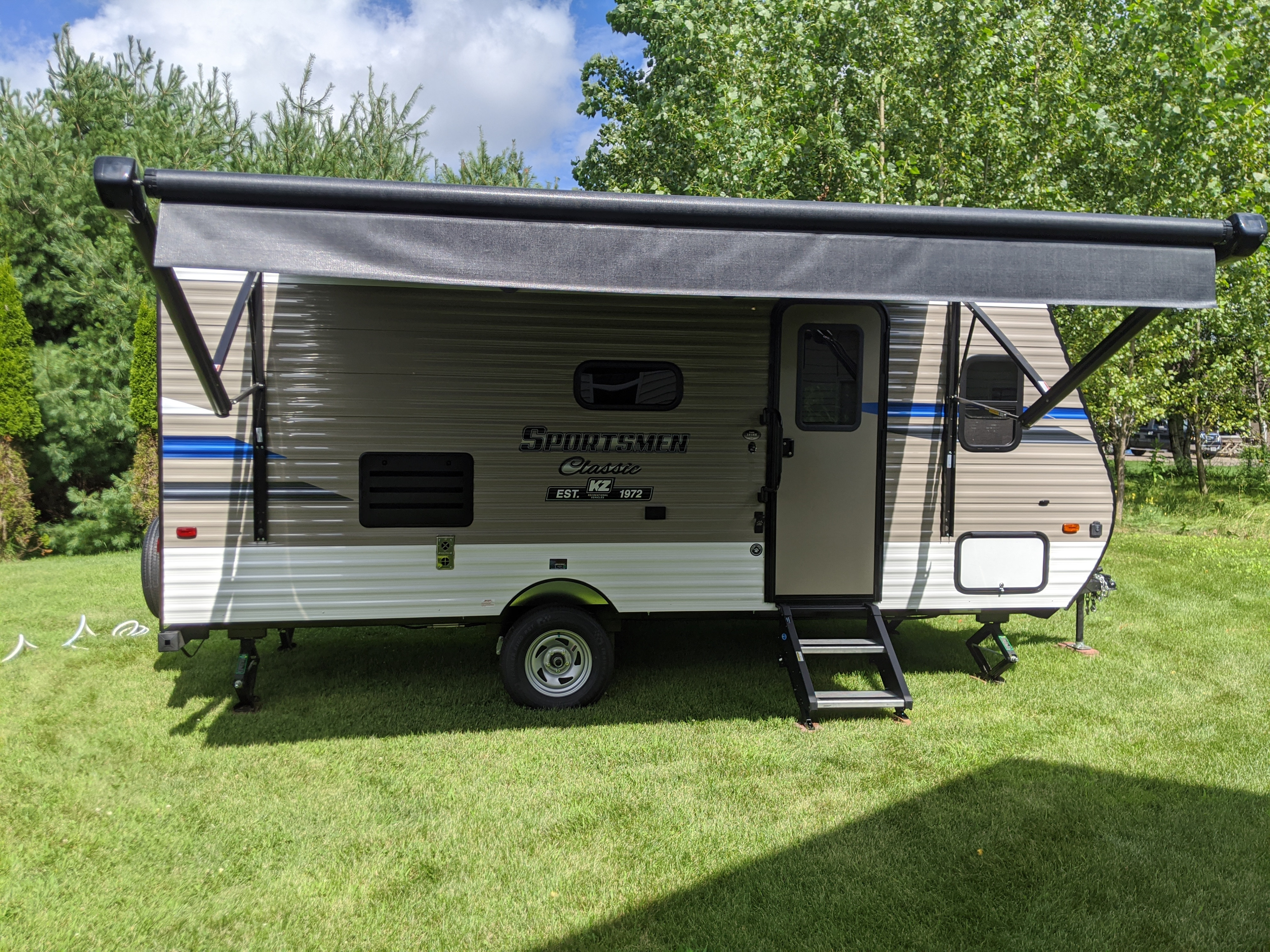 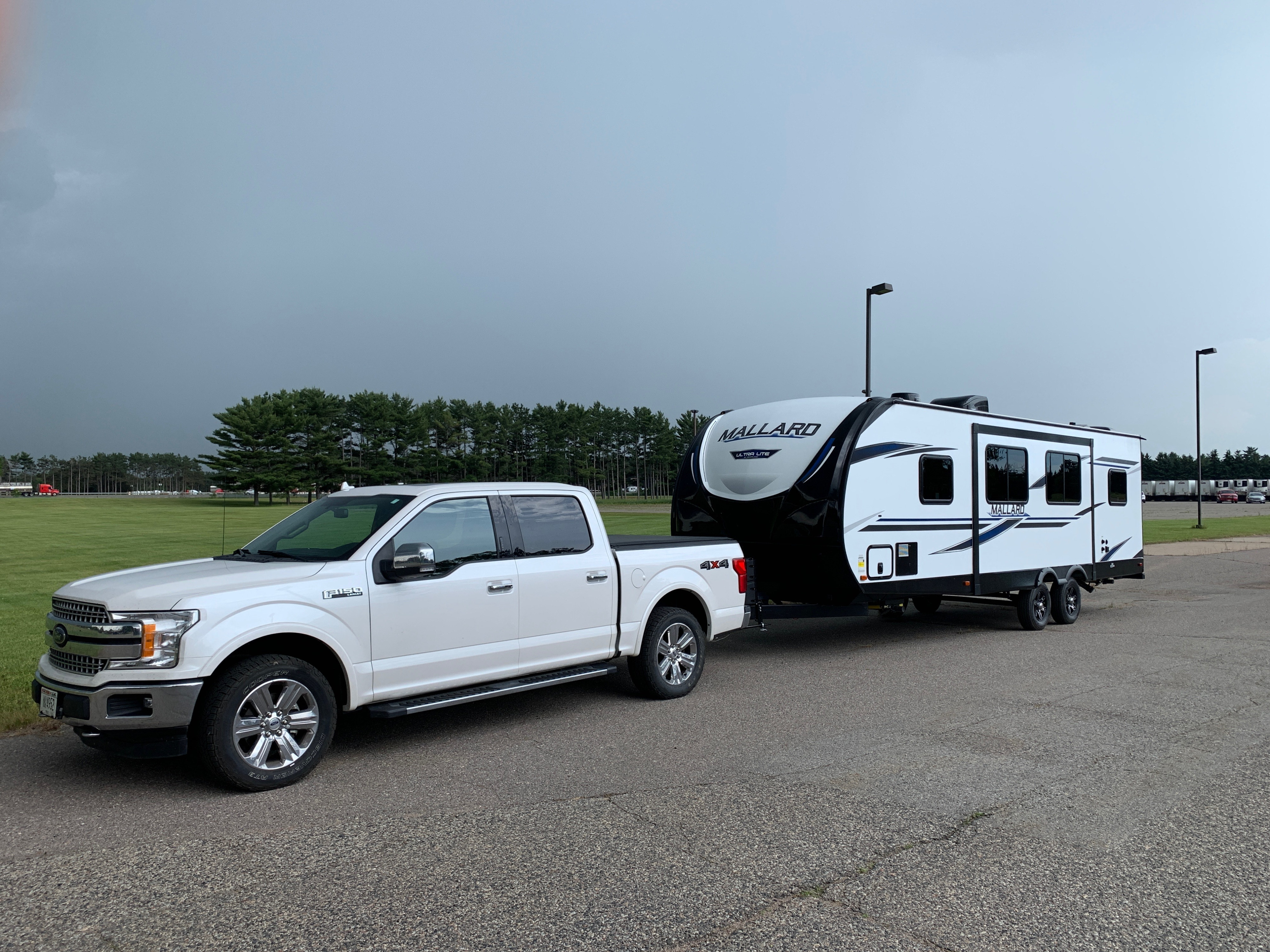 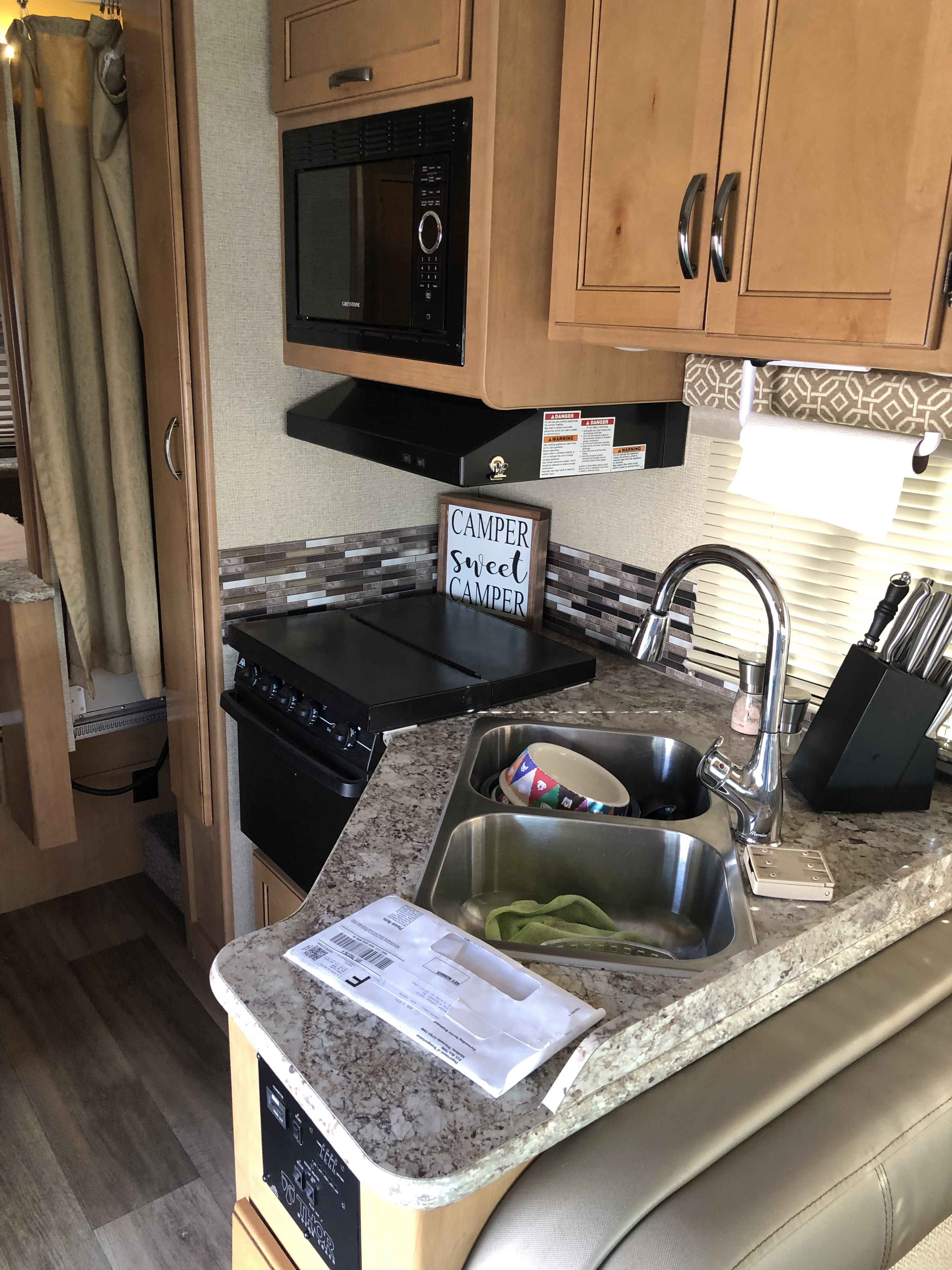 When you arrive at your destination in Eau Claire, Wisconsin, camp at the Lake Wissota State Park Family Campground which has 116 sites, 58 of which are RV friendly with electrical hookups, and accommodate RVs up to 50 feet in length on the banks of Lake Wissota just outside of town. This campground has hot showers, flush toilet restrooms, vault toilets, water supplies, and an RV dump station. The campground also has a playground and an off-leash area for your pup.

While visiting Eau Claire, visit the downtown area which has over 30 interactive statues by local artists, and can be explored on a free self-guided tour. Splash around at Chaos Water Park, discover the children's museum, or visit the farmers market just outside town at the Harvest Winery and Orchard in the fall, when you can get lost in a corn maze, commune with farm animals at the petting zoo, and enjoy tractor rides and live entertainment.