I love to travel, to experience life, and to treat others as if they have something to share. Good conversation is the best antidote to an unknown place.

We had a great week exploring Sedona and Prescott AZ. The motorhome was clean and functioned well. Justin provided good instructions on the walk-around and was available for calls when I wasn't smart enough to figure out how something worked. All in all a very good experience.

Get the best all around Coach here! Need us to meet you with the coach? It's all about convenience and we're here to help make your next adventure the way you like it.
2015 Mercedes- Turbo Diesel 25' Motorhome by Leisure Vans the most revered name the luxury category. Amazing high intensity Mercedes headlights help you see better at night. Push botton stabilization when you’re parked so the cabin doesn’t move is a must have and its build in!

The safest and most comfortable driving experience and the best fuel economy period. With an average of 20 miles per gallon at 60mph you will save a lot of money on fuel costs. The ride is so comfortable and quiet its luxury is unmatched.

Parking is a breeze and can often fit in a typical parking space. (Huge bonus).

This is the RV you need to try before buying one. Its the ultimate in travel vans!

Sleeping arrangement Options to let us know how to set it up for you:

Important Notes:
1. We rent in 24 hour periods. So if you pick up the RV at 8am, it must be returned by 8am. Pick-up and drop-off times need to be set in advance within the hours of 8:00 AM and 9:00 PM.
2. This coach is not available for Burning Man, Coachella or any other Music Festival. If found to be at the named above it could be considered legally reprehensible.

Cleanliness:
3. Please return the RV "broom clean." This means please remove all trash, wipe off counters and inside the refrigerator also turn it off. Clean stove, oven, microwave, and sweep the floor.
4. No Smoking allowed in the RV including the electronic cigarettes - Evidence of smoking will be met with a $500 deep cleaning fee from your damage deposit, and additional fees if there is damage.
5. Repeat clients privileges offered to sweeten the deal!

Cancellation policy moderate
Mileage
150 miles free per day You will be charged $0.55 for every mile over per day.
Generator usage
3 free generator hours per day If you exceed the included hours you will be charged $3.00 per hour.

About the host, Justin

We had a great week exploring Sedona and Prescott AZ. The motorhome was clean and functioned well. Justin provided good instructions on the walk-around and was available for calls when I wasn't smart enough to figure out how something worked. All in all a very good experience.

Justin was very flexible and accommodating and easy to work with. His RV was easy to drive and we had an excellent time.

I strongly advise against renting from Justin Burlingame. After barely giving us any instructions on the RV we rented from him last August, he told us to have fun and "enjoy the journey." We were supposed to have enough water to at least get through 2 days, yet what he supplied ran out on the first night, and for the rest of our camping trip, we had to use the public facilities to go to the bathroom and shower. The luxury of having our own bathroom was a large part of the reason we rented an RV in the first place, so not having use of water beyond 3 quick showers and a couple uses of the toilet (literally) was pretty disappointing.

We also asked Justin if he recommended extra propane just in case, which he did not. And then we ran out in 100+ degree heat. So A/C was not an option (another reason we got the RV in the first place as we were going to the desert).

Once we returned from our trip, we texted Justin that the RV was parked outside (as agreed upon). We asked him to please let us know when he came to pick it up, and if there were any issues. We were sitting in the backyard, and never heard from Justin after he picked up the RV. Then, he messaged days later saying there was an issue, but not specifying what it was.

Outdoorsy then charged us $800 (on top of our rental cost which was already paid in full). Even after messaging Justin asking for details and what the problem was, he didn't respond. Weeks later, Outdoorsy asked for our pictures of the RV post-trip. We didn't hear anything, then FOUR MONTHS later, were finally able to speak to a representative who explained that Justin was claiming we caused damage to his RV.

In January (we rented in AUGUST), Outdoorsy billed us another $1,200 to hit the $2,000 insurance deductible that they force you to get. And in January (FIVE MONTHS AFTER OUR TRIP), we got details of the claim. The damage that Justin claimed we incurred were scratches ... the kind that were so light we could barely see them ... and the kind that could be easily fixed with some buffing and paint. Yet the repair quote we received included a whole range of other repairs to the RV, including replacing the entire door! And the quote included a labor cost of $1,575!!! Again, we were only responsible maybe for some light scratches.

In the photo section, you can view the entire ludicrous repair quote. The bottom line is that Justin took advantage of us and, after choosing not to inspect the RV with us upon pick up, and not responding to texts or providing any information about the (later) reported damage, he used us to pay for a multitude of renovations to his RV.

Adding insult to injury is the fact that we pre-paid for an entire tank of gas. The gas was half empty when Justin delivered it, and we had to pay over $100 to fill up the tank. So he ripped us off there too. AND, there was waste in the bin when dropped off, the bathroom was dirty with smears all over the mirror, and he arrived later than the agreed-upon time.

Beyond Justin's fraudulent and insidious claim, robbing us of an extra $2,000, Outdoorsy's handling of the matter was also unacceptable. The lack of communication and timeliness exacerbated everything to the point that we were past the point where we could dispute the charges with our credit card company.

Do yourself a favor and don't rent from Justin.

It was our first trip on an RV, and it was an amazing experience! Justin thought of all the little details to make the trip as comfortable as possible. We will definitely rent from Justin again! 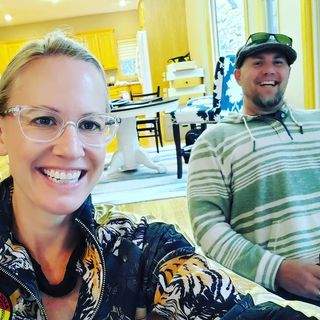 Great experience! It was perfect for 2 adults and 1 or 2 small kids. It drove nicely. Justin was responsive. Easy to use for first time RVers.

33' Fleetwood Excursion Diesel with Slide Out (38)

"Peanut" the 28' Minnie Winnie by Winnebago